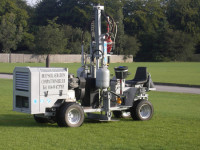 "This pitch was constructed two years ago, and has always been a problem," says Grounds Manager Martin Lloyd, who has been at Nottingham for 20 years. "An old ash running track was dug up and incorporated into the base layer, which could be the cause of the problem, especially as there's clay underneath the ash. Above the base layer the pitch is of sand construction, and because it's raised 1.5 metres above its surroundings we didn't install a full drainage system. Natural drainage should have been sufficient."

David Green, of Suffolk based Terrain Aeration, who was called in at the end of August to treat the pitch can vouch for the presence of a severe compaction pan about 20 inches below the surface. "We used Airforce, our largest and most powerful machine and found 6 inches of high resistance material," he recalls. "We got underneath it, but the job took three days and we broke the hydraulic elbow connection on the J.C.B. hammer, due to vibration fatigue."

Working to two metre spacings on a staggered grid pattern, Green hammered Airforce's probe one metre down through the compaction pan, and inserted compressed air at 18 bar to create underground fissures and fracturing all the way up to the surface. Dried milled seaweed was injected on the final air blast, which will swell on contact with moisture and keep the fractures open. The probe holes were then backfilled with Lytag.

"I was watching him now and then, and it took some hammering to get through," remembers Lloyd. "We've been playing on this pitch twice a week since October, and it not only drains properly, but the quality of turf has improved. The grass is rooting better. Before treatment the team would kick out huge lumps of turf during a game, but now this doesn't happen."

For further information on Terrain Aeration's deep, compressed air de-compaction treatment, contact the company on Tel: 01449 673783, or visit their website at www.terrainaeration.co.uk