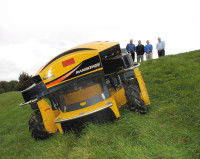 Broadway Golf Club, near Evesham, has taken a pioneering approach to managing its steep banks and previously uncut areas, with the introduction of a Ransomes Spider II remote controlled mower. Kevin Marks visited the club recently to see how it was being applied.

Modern Health and Safety standards have meant that Cedric Gough, Course Manager at Broadway Golf Club near Evesham, has had to find alternatives for mowing the steep banks that line the fairways on part of the course at this 112-year old club. Previously, these were maintained with hover mowers or small ride-on machines, but now, with the introduction of more stringent standards, some of the banks were being left uncut.

"I saw the Ransomes Spider when it was launched at Saltex back in 2004 but I must confess that I looked upon it as a bit of a novelty," he said. "It wasn't until I was visiting Ransomes Jacobsen's factory in Ipswich earlier this year, as a guest of my local dealer TH White, that I recognised its potential, especially the latest, larger version with the powered winch." 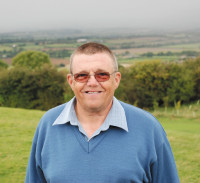 With the added demand from members wanting the banks maintained on a regular basis, a demonstration was arranged on site and both the small and larger machines were put through their paces. From the demonstration it was obvious that the larger machine, with its wider cut and powered winch, providing the capability to tackle inclines greater than 40°, was the preferred option. A further demonstration to the Greens Committee was arranged, who endorsed the decision to purchase the Spider II.

Managing Secretary Vic Tofts added, "With the Spider we can now undertake all the bank work and comply with H&S guideline; the machine copes admirably with all the conditions here. But it's not just H&S where we are seeing benefits, there are environmental issues where we can improve making use of this new machine."

Cedric and his team of seven greenkeeping staff are very environmentally aware and committed to conservation at Broadway. There are rare species of Cotswold grass within the 110 acres of maintained turf around the course, some of which has never been cut in the thirty four years that Cedric has been at the club. 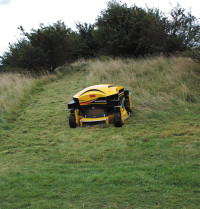 "We're also using the Spider as a conservation tool because it can easily tackle these previously unmanageable areas. It can get under bushes and into other awkward areas, which enables us to cut the grass down and collect the cuttings, which then encourages the wild flowers and rare grasses to flourish, as well as providing a better environment for the local wildlife," Cedric added. "The machine is very straightforward to operate and we can simply risk assess a given area, ground anchor the machine and mow the bank from a comfortable and safe position. We can do this without interferring with the golfers enjoyment of their round."

In this particular instance it was a combination of members requests for improved presentation and H&S issues that led to the pioneering solution by the Broadway club. This is the first use of a Spider mower in a golf course environment.

"We had a couple of central issues," said Vic Tofts, "and were able to solve them using a single machine. You have to go through a process of sourcing a possible solution and presenting it to the Committee to get them on side; to get then to appreciate the benefits it will bring to the Club. The fact that it was a Committee member who first requested that a particular bank be cut, worked for us and, in resolving the problem, we have demonstrated that we are a forward thinking and innovative management team."

Broadway Golf Club was established in 1895 and the present golf course opened in 1910. Although only 6200 yards (par 72) it does provide a good test of golf for all abilities and has an inland links feel due to the rolling fairways and undulating greens. When the wind blows it can be a tough challenge.

Its location, at almost 1,000 feet above sea level, is on the edge of the Cotswolds escarpment, with outstanding views over the neighbouring villages and beyond to Bredon Hill and the Malvern Hills. The composition is quite poor with minimal topsoil on top of Cotswold brash, but this does mean that it drains very well, so much so, that it was only closed for one and half days during last year's very wet summer. 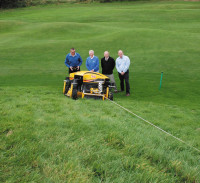 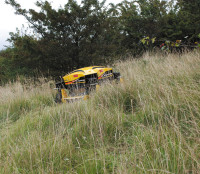 Cedric joined the club as Head Greenkeeper back in 1973, when it had just 300 members, having previously worked as First Assistant at Ross-on-Wye. He began his career ten years earlier at the then 9-hole Bridgnorth Golf Club, moving to Ross-on-Wye in 1966. Today Broadway has over 900 members and, unlike many clubs, boasts a healthy waiting list of 200 names.

"Our philosophy is to provide the best possible playing conditions for our members," he said, "while acting responsibly within the natural environment in which we operate. Innovative equipment, like the Spider, enables us to achieve both goals in a responsible manner. We are, after all, only custodians of this wonderful environment here at Broadway, and should endeavour to leave it in better condition than when we inherited it."