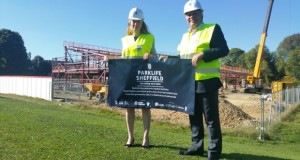 A national Football Association (FA) grassroots scheme, in which Sheffield is leading the way nationally, is set to take a further step forward.

In what is the first of such partnerships in the country, Sheffield City Council has teamed up with The FA to invest in a number of new football hubs across the city, in a bid to get more young people playing football on top-class facilities to rival any in the country.

The first two new football centres are currently under construction at Graves in the south of the city and Thorncliffe at High Green, and it is announced today that the potential site for a third has now been selected.

Subject to planning approval and finalising external funding, this third hub would be a £6m football facility and major public fitness centre on the site of the former Westfield school in Westfield Crescent, Mosborough.

It could open as soon as spring 2017, with two full-sized 3G artificial grass pitches, three natural grass pitches, an affordable and public fitness centre, changing rooms and an education room.

Councillor Sioned-Mair Richards, cabinet member for neighbourhoods at Sheffield City Council, said: "As home to the world's oldest football club, it is only fitting that Sheffield should be leading the way nationally with this 'Parklife' scheme.

"The main aim is to halt the decline in football and turn it from a sport that requires subsidy into one that generates surplus, that can be invested in future facilities and the development of the sport.

Image: The FA chairman Greg Dyke and Cllr Isobel Bowler at the Thorncliffe site where one of the first Parklife football hubs will open