Pitch abuse - Jens is the man! 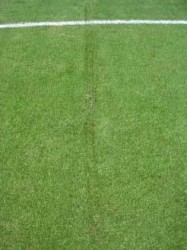 Here we go again! Goalkeeper damage back with avengeance!

Despite directives from the Premier League and Football League, goalkeepers are still flouting the rules about marking the pitch, with Arsenal's Jens Lehman high on the list of culprits. Not only is he not content with damaging the area in front of the six yard box but he also feels it is within his rights to scrape a 20ft line on the pitch in the area in front of the portable goals! Is this player taking the mickey, or what!

There are some more images of damage he caused recently at the City of Manchester Stadium at the bottom of the article.

Following our survey last season we did get a positive response when our findings were put before the relevant authorities. The Referees' Committee of The FA have agreed to forward 'additional' markings to the International Board for discussion as a possible Law change.

However, until we get a decision on that proposal, something needs to be done before we hit the non-growing winter months when players are the first people to complain if there is no grass in the penalty areas or if a ball bobbles. Referees need to set examples and start booking these keepers.

Remember the response of the Everton player who got sent off for removing his shirt after scoring a goal? Not done it since has he?

Please keep sending us any other evidence of unnecessary damage caused by goalkeepers or over extensive warm-ups. We will keep publishing them on the website and sending them off to the football authorities. We are not going to rest until this problem is resolved!