As home to the Danish national football team and current league champions FC Copenhagen, the Parken Stadium's natural-turf pitch is constantly under the spotlight.

Since the addition of a retractable roof in 2001, the venue has become one of Europe's leading sports and entertainment venues with the ability to host an increasing number of diverse events. By the end of 2003, Parken will have staged more than 30 first-class football matches, plus numerous training sessions, as well as a string of concerts including the Rolling Stones, Bruce Springsteen and Robbie Williams. Parken has also hosted boxing, tennis and speedway as well as dinner parties for up to 8,000 guests. At present, the event calendar is compressed into nine months, but the addition of the retractable roof is paving the way for the stadium to operate on a year-round basis in the coming years.

But the success of the stadium has placed greater demands on the pitch. Maximising the venue's revenue-generating, multifunctional potential has at times been to the detriment of the natural-grass surface. The ongoing challenge is to investigate possible solutions to maintain the standard of the pitch. Advances in the natural-turf industry, with palletised turf systems, hybrids and sliding pitches, together with the development of artificial surfaces presents many options.

Until recently, many architects have failed to recognise the importance of the playing surface in the design of new stadia and renovations. The environment within many large stadia does not aid the growth of healthy grass - reduced air and light levels are commonplace. The introduction of Parken's retractable roof in time for the 2001 Eurovision Song Contest - which attracted 80,000 spectators over two days - 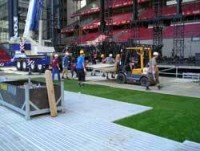 This has prompted a different approach to pitch maintenance issues. The damp, shaded parts of the natural turf encourage the build up of algae and heighten the potential for diseases. Daily monitoring of grass growth and methods to aid the production of healthy grass are the main focuses of the maintenance regime. Reducing compaction applied to the surface is achieved by carrying out the majority of operations

A turf protection system at Parken allows the passage of light and air to the plant. The problem is that with the roof closed for certain events, the surface is often starved of both.

With a team of 24 the 8,000m2 can be covered in around four hours. Prior to this, maintenance work has to be carried out to ensure the surface will come through an event such as a concert with minimal damage. While the turf is covered, especially with the roof closed, the grass becomes stressed and

To counter this, an increased rate of liquid potassium is applied to the natural turf to aid in the movement of energy through the plant, while iron is added to increase the resistance to disease. Nitrogen applications are reduced to discourage detrimental pathogens. Aeration is carried out pre- and post-covering to minimise compaction.

Some have questioned the ability to grow and maintain a good grass pitch in such an unforgiving climate as Scandinavia. That theory has been proven to be incorrect by many educated turf professionals and at Parken. Demands on the natural-turf industry to improve standards have sparked a wave of scientific and technological developments, including advanced heating and lighting systems, which have aided the turf manager 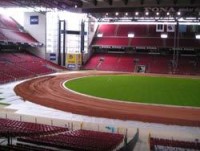 Due to the heavy event schedule at Parken, three new pitches have been produced in the past four years. In 1999 and 2001 new pitches were established in less than six weeks from seed. Before that, various attempts had been made to produce a satisfactory surface. The pitch was constructed in the winter of 1992-93 during the football season's winter break. A tent was erected to enable the work to be carried out.

The depth of construction was 950mm and comprised of irrigation, heating and drainage systems. It was not a complete success. During the winter of 1993 grow lamps were used in an attempt to stimulate growth. Growth was established but the plant was weak and did not 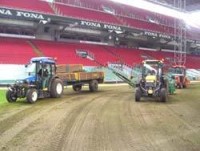 Re-establishing the hybrid pitch, which had been buried 2cm under the surface, was the main objective in 1999. Over the summer, 300 tonnes of the existing pitch was removed and the fibres brought back to the surface. The same procedure was again carried out in 2001 to rectify damage caused by the compaction resulting from the use of the pitch to host the 2001 Eurovision Song Contest.

This year the staging of a speedway event followed by back-to-back concerts in a busy four-week period for the facility forced Parken officials to put down a new grass pitch. Each re-turf has cost in the region of £100,000 (US$167,600).

Throughout the natural-turf industry there is a genuine fear about the threat presented by artificial-turf producers due to advances made in some of the products now available.

Traditionally football has been played on natural grass. But third-generation artificial surfaces are now being researched by FIFA and UEFA as a consideration for stadia and cannot be ignored.

With this in mind, the turf management team at Parken is working hard to achieve a consistently high standard of surface for the football players each week. Installing an artificial turf at Parken, which meets the standards of world football's governing bodies, has been discussed as a way of reducing the turf management challenges. It would create a consistent playing surface for football and, in theory, allow the venue to hold more events.

The question is: will it aid Parken as a business? To date, there has yet to be a convincing argument to persuade officials to switch to a synthetic surface. The facility operator must consider the needs of the national football teams, the domestic league and the potential of hosting Champions League and UEFA Cup matches - FIFA and UEFA have yet to sanction the use of artificial turf for their major competitions. Currently the only way to satisfy all the teams involved is on natural turf.

In addition, Parken officials have yet to receive guarantees that a heavy event schedule will not have a detrimental effect on the performance of an artificial pitch in the long term. A situation might arise where the artificial surface may need to be re-laid. But at what cost?

Meanwhile, turf management is also being aided by heating and lighting systems to produce a healthier plant in difficult grass growing conditions. At present these options remain financially unattractive to many and, in the case of Parken, are not logistically viable. A portable palletised pitch such as the Greentech ITM system might be an option for Parken in the future. It would provide officials with the opportunity to maximise the stadium's multipurpose potential. Logistics and financing are the possible drawbacks, but these could be resolved due to a more flexible venue attracting a greater number of events and generating increasing revenues.

While the potential to replace the playing surface at Parken in the coming years has not been discounted, the turf management team continues to produce quality pitches on a weekly basis and the concern remains that any alternative may not live up to expectations.

This article was previously published in the November 2003 issue of Stadia magazine, the international review of sports venue design, operations and technology. For more information about the publication and news covering the stadia and arena industry, visit www.stadia.tv