Of all the sports played on our green and pleasant land, cricket is, perhaps, the one which is most affected by the playing surface. Evenness of bounce, pace, seam movement and spin are all dependant on the pitches we produce. The skill of the groundsman to be able to produce the type of pitch required can go a long way to influencing matches, titles and even careers. 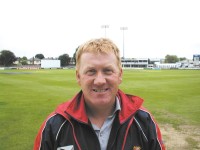 Is it unfair or unethical to use home ground advantage, or is it part of the game to be used in a team's strategy? Will it put the groundsman under undue pressure because of the threat of a deduction of points for a sub-standard pitch, (in both four day and one day competitions), loss of reputation or even job that could come with such a stigma?

With promotion and relegation from both the County Championship and the one-day leagues, plus the possible large amounts of money involved in Twenty20 now, surely it is in a club's interest to use all the advantages available to achieve success, including home advantage.

Most cricket pitches are batsman friendly these days. Giving the bowlers a small ray of hope will surely make for more interesting cricket and, hopefully, a better balance between bat and ball. Obviously, there shouldn't be a free for all with regards to pitch preparation, and there are fairly stringent regulations in place at present to stop extreme cases of doctoring.

You could make a point that gluing pitches is a form of doctoring by artificially making a surface that batsmen should thrive on. However, there is leeway in the regulations for groundsmen to produce pitches giving the aforementioned balance.

A lot of county groundsmen have been at the same club for many years and feel some loyalty to that county, so it is only natural that there would be some assistance for the home side. After all, the pitch is the same for both sides, although one side may benefit more from any help rendered, surely it is in the interest of cricket that teams should be balanced with specialist bowlers of all types.

There is a school of thought that good bowlers don't need help and bad ones aren't worth helping! And, whilst there is little doubt this is true, we still have to remember who employs us, and I don't think it is wrong of employers to expect some form of home advantage assistance from employees. Was it wrong for long ball football teams like Wimbledon FC to leave the grass longer when skilful passing teams like Manchester United came to their ground?

The blandness of flat pitches, which are then adjudged 'good' by the governing body but are, in fact, making pitches the same around the country and, combined with the points penalties for pitches which misbehave a bit, is making groundsmen naturally cautious and inclined to play it safe.

This is not particularly interesting for spectators, nor, I would suspect, players. In years gone by, the variety of pitches encountered around the country would force teams to have specialist bowlers and create opportunities for young English spinners, something we haven't seen much of for years. There needs to be some encouragement; being crashed around the ground for a couple of overs and then taken off for the duration of the match is not good for English cricket.

Cricket should involve all styles of player, from pace bowlers to wily spinners, batsmen who occupy the crease for long periods through to explosive batters who score quick runs almost at leisure.

Admittedly, in the past, uncovered pitches had a big say due to the unpredictable nature of the British weather. But, due to television coverage, sponsors needs and spectator pressure, it is almost impossible that a return to that situation would ever happen. And rightly so. The more cricket played the better.

So, any variation in the pitches would have to be achieved by the skill of the groundsman. There are occasions when, no matter what the groundsman does, there will be a low scoring match, even on a flat, shirt front of a pitch! However, generally, flat pitches load the game too much in favour of the batsman and they do not need to graft too hard for runs.

The other side of the argument is that when players reach test level they will play on flat pitches and need to perform on those types of pitches during their apprenticeship. That is valid for bowlers, but the most talented ones will always shine through, no matter what the conditions.

The 2005 Ashes were played on good pitches throughout and that showed two positive teams can create a fantastic test series. However, the reverse is true. During the series between India and Pakistan in 2006, the first two tests were played on flat, slow, lifeless pitches and were very high scoring bore draws, barely getting through the first innings. We had something similar at Chelmsford in the 2007 Championship season against Nottinghamshire CCC. However, since that match we have had some very good games of cricket, on pitches which you would have had trouble picking out from the rest of the square, where the match has first swung one way and then the other, with a variety of green tops, (without Danish Kaneria, our Pakistani international spinner), very dry pitches, (with Danish!) and even some a mix of the two!

As most cricket experts will tell you, the Ashes series was the exception rather than the rule, excitement wise, and most spectators would say they prefer to see an even contest with neither bat nor ball dominating.