Dagenham & Redbridge is delighted to announce that work on a new state-of-the-art playing surface has begun at Victoria Road. The new hybrid pitch means that both Dagenham & Redbridge and West Ham United Women will have one of the best surfaces in their respective leagues.

Added to this, a new broadcast gantry, performance analysis system and press seating will be installed to further improve the facilities at the stadium.

This is a fantastic development for both Dagenham & Redbridge and West Ham United Women, one that will benefit both clubs for many seasons to come. The work has been made possible thanks to a Football Stadia Improvement Fund grant to support improvements at grounds FA Women's Super League clubs play at.

To ensure that the surface will be ready in time for the coming season work commenced on Monday 31st May.

West Ham United groundsman, Dougie Robertson went into further technical detail on the work that is taking place at the stadium:

"We are rebuilding the playing surface at Dagenham to a much higher standard. The pitch shall become a hybrid grass surface built on a sand base, increasing drainage and playability whilst maintaining a consistent surface. Teams like Real Madrid, Manchester City and Brentford are all enjoying this product at the moment.

"This is a huge improvement on the playing surface at Dagenham with a full irrigation system also being added. The pitch shall be around 5% artificial, be more stable and will provide optimum player performance on and off the ball." 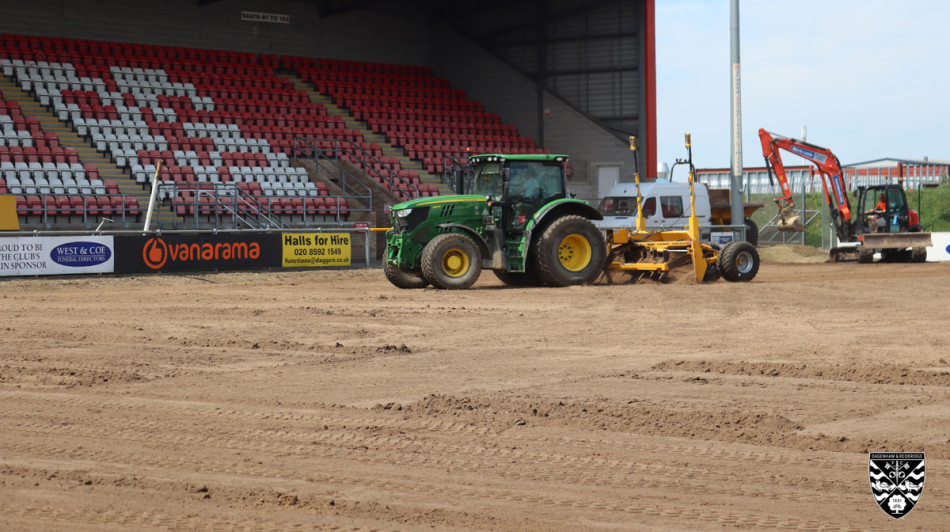 "The technology around pitch surfaces has improved greatly over the past few years but the surface we will have, coupled with a new drainage and irrigation system should provide us with one of the best pitches in the National League. The Club is extremely grateful to the support of the Football Stadia Improvement Fund which has enabled us to go ahead with the developments."

West Ham United Women's General Manager, Aidan Boxall shared his delight at the improvements being made at our home ground:

"We are absolutely delighted that work has begun on the pitch and are grateful for the support of the Football Stadia Improvement Fund.

"Our season tickets prices remain one of the cheapest in the WSL as we continue to promote family affordable football. We want to be a huge part of the community and see our home at Dagenham as a great hub for the community to engage with one another." About the Football Stadia Improvement Fund

The FSIF is solely funded by the Premier League and is the country's largest provider of grants towards projects that help improve the comfort and safety of lower-league football grounds in both the professional and amateur game. These improvements range from new football stands and turnstiles to floodlighting and improved provision for disabled supporters.

About the Football Foundation

The Premier League, The FA and Government's Football Foundation is the largest sports charity in the UK. It champions and supports fair access to quality football facilities for everyone, regardless of gender, race, disability or place.

The Foundation receives money from the Premier League, The FA and the Department for Digital, Culture, Media and Sport, through Sport England. This is matched with partnership funding and awarded as grants to create outstanding grassroots facilities that enable better games and attract more players, helping to transform communities.