Pitch-Line 3G is relaunching the concept of inserting artificial lines into natural turf sports pitches. The Irish company is currently having a resurgence of interest in their product after modifications to the machine and development of better inline materials.

On its initial launch, the lines had a tendency to discolour and wear away. The straightness of the lines was dictated by several factors, mainly due to ground conditions where, on poor draining sites, the lines would move over time. Vandalism was another issue, with it being possible to pull the lines out fairly easily.

However, eight years on, things have changed. Firstly, the process of installing the lines is now much quicker, and it only takes about a day to complete the marking out of a football pitch. Secondly, the lines are made of a stronger PVC type material, which does not discolour. The installation machine uses laser technology to ensure the lines are put in accurately and straight, and at a greater depth.

Pitch-Line 3G are currently operating three franchises in the UK , one in Scotland, one in Ireland and one in England. Sam Breeden from Sweepfast has taken on the England franchise and has completed a couple of pitches in Wales.

I asked Sam why he had invested in this new franchise? He explained that, as a company specialising in artificial pitch maintenance, he wanted to add some additional value to the services he offers. He believes there is some potential for the concept, especially in the current economic climate where local authorities are being asked to reduce costs.

Sam was keen for me to see the new machine and the end product, especially now some of these inlaid lines have been in the ground for four years on some pitches in Ireland.

So, without too much persuading, I found myself on a ferry heading across the Irish Sea to visit two clubs in the Emerald Isle. During the last four years, over thirty pitches have had the system installed, and include football, rugby and gaelic football pitches.

A couple of the driving forces for the renewed interest in this concept are low maintenance budgets and the weather - it does tend to rain a lot in Ireland! When using traditional linemarking paint, it is not unusual for 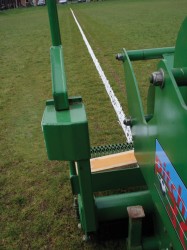 the lines to be washed away just a few days after marking out. In addition, many of the clubs rely on volunteer labour and do not have large budgets.

Our first port of call was Killeavey GAA Club in Newry, where we met up with the system's inventor, Barry Douglas, and the club's groundsman, Sean Callan.

The club invested in the system two years ago for their heavy, soil based main pitch. The lines had been down for two years and the club have been very pleased with their performance, saving the club precious money and Sean's valuable time.

Next stop was AFC Craigavon where the system has been in use for four years. Again, on a heavy, soil based pitch, the lines looked impressive and stood out well, bright white with no signs of wear. The club's reason for investing in the system was to avoid the problem of the lines being washed out before games.

The Pitch-Line 3G procedure utilises UV treated white PVC type material with a high Kilo-Langley (a measure of solar energy) and mechanical strength. This material is pre-shredded into supple and flexible fibres at both edges. Using the triple disk Pitch-Liner machine, the PVC type material is folded and inserted 50-65mm into the ground.

The width of the finished line can be adjusted to between 90mm and 120mm wide using the three disk system. Narrower lines can be achieved by using less disks.
The solid portion of the material lodges itself in the root structure of the grass, leaving 30-40mm of highly visible white fibre fronds above ground level. The material has been specifically designed to remain clear of the ground and, as long as the grass is cut to below 30-40mm, the line will stand proud and plain to see. 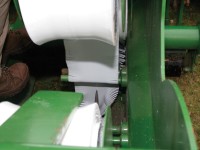 Barry Douglas explains: "The initial material I was using was getting flattened, so I've made substantial improvements to the original idea and the results have been first class."

"Industry experts suggest that the material has a useful life expectancy of well over three years with proper maintenance. However, the longest installation of the 3G material is over four years - and it shows no signs of adverse wear in some of the harshest winters since records began!"

"Conventional grass cutting equipment does not cut this product, and the existing grass root structure binds it into the ground," explains Barry.
"Importantly, the patented Pitch-Liner can be guided by a laser, ensuring all line markings are 100% straight, important when the lines are to last such a long time."

Taking into account buying a spray jet linemarking machine at around £700, plus the cost of paint, labour and travelling time at another £700, a first year figure of £1,400 is soon reached. Bearing in mind that the Pitch-Line 3G system costs around £1,800 per pitch (depending on the sport), it is clear to see that the system will have easily covered its costs in its second year of use.

With examples of pitches lasting at least four years, Barry is confident he now has a good commercial product for the UK.

Having now seen the pitches in Ireland, and seen how well the lines look after four years of use, I can honestly see some merit in installing this system on some pitches.

For example, many local authorities have single football facilities, often situated in remote village location. Not having to mark these out on a weekly basis will save a lot of time and money. Also, some of the lower level league pitches may benefit from having this line system installed.

I do not think we are talking about a threat to groundsmanship here; in the right situation, there's some merit in using this method.

Here are some frequently asked questions about the Pitch-line 3G system.

Will frost affect the Pitch-Line system?
No. The material is not going to be distorted or damaged in any way by frost or snow. The PVC type material is frost proof.

Water will not affect the material in any way, other than to clean it up. The PVC will not absorb water in any form.

What are the chances of discolouring?
As the PVC type material used is of high Kilo-Langley strength, it can withstand UV rays for years. This means it will not discolour or fade in sunlight.

What is the life expectancy of the PVC type material?
Its high Kilo-Langley strength will withstand UV rays and last up to ten years in the northern European climate.

How will mowers affect it?
They will not cut it. Most pitches will have their mower preset to cut the grass to the standard length, (normally 26-30mm) which the white lines will be below. They will be left untouched by the mower.

When is the ideal weather to have the lines placed in our pitch?
The lines can be installed at any time and in most weather conditions, except for extremely hard ground conditions or snow.

Is it possible to kick the lines out of the ground?
This is a highly unlikely occurrence, as the lines are placed 50mm below the surface of the ground and are well secured.

Are the lines affected when vertidraining the pitch?
No. This will not affect them in any way.

Will sand slitters have any affect on the lines?
Yes. They will cut the lines.

What if the ground is harder than usual?
Ground conditions are addressed by increasing or decreasing the weight at the rear of the machine. The harder the ground, the more weight required.

What is the laser for?
Obviously, if lines are to last for years, they must be installed properly. The Pitch-Line system uses a laser to guide it in straight lines. The laser is set up on the far side of the field, and a target installed on the tractor. As the tractor drives along, any deviations from the straight can be seen by the operator and corrections made. Once marking has begun, the laser must not be moved.

How are the centre circles and penalty area arcs drawn?
These are achieved by offsetting the Pitch-Liner to the tractor pulling it, and allowing it to be guided around in the perfect circular or half circular shape.

How long does it take to install?
The procedure - weather permitting - takes up to two days maximum (depending on the type of field being installed - football, rugby, Gaelic etc.) but, typically, a football pitch can be completed in under seven hours. The pitch is usually playable by the end of the installation day.