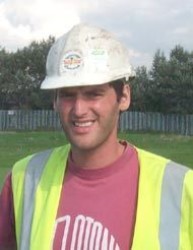 I have been working here in the UK for over two years now as a Groundsman at a Premiership Club. It has been an enlightening experience and I felt that it would be good to relate the differences that I have seen between working practices here and back at my previous club Red Star Belgrade in Serbia. My good friend Boško Miltenović is the Head Groundsman there and recently I visited him, while staying with my parents on holiday. 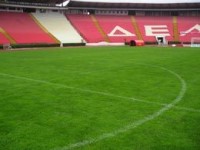 Boško has been Head Groundsman at the club for the last three years, before that he worked at FC Partizan Belgrade. He is in charge of five training pitches as well as the main stadium surface.

The biggest problem is the lack of finance available for him to do his work. Averaged out across the year, Boško has about 600 euros per month to spend, to you and me that's about £5,000 per year. This money is for materials, used during the year, as well as the end of season renovations, machine repairs and new equipment including goals, nets and flags. The club have endured financial problems and are now forced to sell bright new talent coming through the ranks. The acute lack of cash means that as usual the pitch is far down the list of priorities.

Fourteen years ago the club won the Champions League, but has been in decline since then. This season, PSV Eindhoven knocked the club out of the competition; the game was officiated by Pierluigi Collina, the Italian referee. Mr Collina was very complimentary towards the pitch, in light of the lack of resources available.

Boško does have access to up to fifteen staff for divotting and pitch repairs, so the work is heavily orientated towards labour. They do any necessary renovations, which include turf replacements, seeding, drainage works in-house. If there are large damaged turf areas on the pitches, they import grass from an area just outside Belgrade in the province of Vojvodina, which they buy from peasants. It is very important that turf contains a large percentage of domestic Poa pratensis because it can exist in the extreme conditions (winter down to -20, summer up to +45). If the areas of damage are small, then they use grass from areas off the pitches that are not within the marked field.

The Serbian winters can be extreme as I said, with daily temperatures at -20 degrees. For five months there is no growth and when there is snowfall the staff have to clear the pitch every time by hand because the Serbian premier league regulations require a clear pitch. The winter starts around October time and, because of the harshness, there is a mid-season break from the end of November until the beginning of January. The pitch doesn't have any undersoil heating, although there is a set of frost protection/germination sheets. 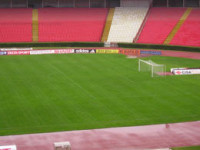 The pitches are seeded with Lolium perenne, Poa Pratensis, Festuca ovina, and Festuca arundinacea. The pitches are maintained at a height of 20mm during the spring and autumn, but Boško allows the grass length to 30mm at the height of the summer. During the summer the grass is cut nearly every day, the rest of the time the pitches are cut about three times per week. Grass seed is purchased through DLF Trifolium and Barenbrug.

The pitches get some nutrition, usually purchased direct from local factories, although from time to time, there is money available to buy more ideal fertilisers. Recently he bought some Scott's Sierrablen 28.5.5. In terms of marking paints, Boško uses a water-soluble white paint, but when there is heavy rain he will mark out using gypsum. 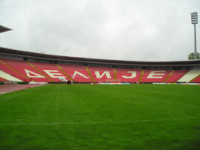 There is one old tractor mounted aerator that does the job, but Boško complements this by getting the staff out with forks to aerate problem areas of compaction. Considering there is little provision for deep aeration, the pitch drains very well. When I took these photographs there was a lot of heavy rain, but it seems to go through the playing surface very well.

There is pop-up irrigation on all of the pitches, a "PERROT" system with 12 sprinklers per field, however the summers are sometimes up to +45 C so they need to irrigate the fields with water cannons as well.

The main stadium pitch is not only used by the club, but also the national side, so on average there are two games a week played during the season. Training is kept to a minimum, except during European club matches or Internationals when teams expect to train the day before the game.

If you think that the wages in the UK are pretty poor, then don't consider moving over to Serbia. Even as Head Groundsman of a premier club, Boško receives gross about £300 per month in wages. This is a higher than average income, due to the amount of hours that he has to work. Saturdays and Sundays are usually included in the working week.

The frustrating thing for Boško is that he reads about all the latest developments with machinery/products on sites such as Pitchcare, but there isn't the financial means to purchase everything he would like.