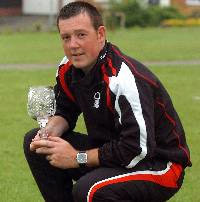 A groundsman has done the double after winning an FA award for being the best groundsman in League One.
Ewan Hunter, of Oakley Vale, Corby, is the head groundsman at newly-promoted Nottingham Forest Football Club and has now won the top groundsman competition for the second year in a row.

The 29-year-old has been working on football pitches for six years, the past three at Nottingham Forest and previously at Rushden & Diamonds.

Before that he maintained golf courses in Northampton, Ipswich and Suffolk, so he is not short of experience.

Ewan said: "I'm now responsible for 10 full grass pitches - the main stadium, three pitches at the training ground and six at the academy for the youth players.

"There are six people in my team and we have to do everything.

Ewan lives with his wife Gemma and their 10-month-old son Benjamin.
He has to make the daily three-hour commute to Nottingham but the journey and the hours doesn't put him off.

He said: "If you ask my friends and family they'll tell you it's a job that's become obsessive really, because I'm always there and never have much time off.

"It's tough work and tough on the family life, but it's one of those jobs that you have to be 100 per cent dedicated to.

"On match day we start at 6am to mark out the line. Then we are there for about an hour-and-a-half after the game.

Ewan will now go head-to-head with the best groundsmen from the other English and Scottish football leagues in a bid to become the best in the UK.

In September the Sports Turf Research Institute will decide which team has the best pitches out of Arsenal, Southampton, Shrewsbury and a Scottish Premier League team, which have all won their respective leagues for best groundsman.

How to get a professional-looking lawn

Ewan has offered a few tips on how to look after your lawn.

He said: "Get a fertiliser programme to get the right nutrients to the grass and feed it at the right times. It's crucial. "Your grass has to be fed and needs to be able to breathe.

"It also needs the right amount of water and light.

"The most important things for grass are water, air and food."