A substantial six-figure investment is being made in Wolves' new pitch - with the new surface set to be up to Premier League standard.

Work began last week on replacing the old pitch. The new one will be a state-of-the-art Desso Grassmaster hybrid pitch, which is used by top clubs across Europe.

Owners Fosun, who have placed a big emphasis on the style of football they want Wolves to play, have pumped big money into the surface.

There has been recent criticism of the pitch, particularly in 2015/16, but head groundsman Wayne Lombard believes the new surface will be of a high standard all season round - and lessen the chances of injuries.

He said the new pitch had been on his 'wish list' and added: "There's no better system in the world. All the big clubs in the world use it.

"It was decided around March time that we'd invest in the pitch at Molineux again this year, similar to what we did in 2010.

"We've been talking about it for about two years and it's been on the wish list.

"We were asked this year about making improvements at the training ground and Molineux and this is something we put on the list again, 'is there any chance of going with this hybrid system?'. The owner said yes.

"We had to justify why we wanted to do it. But the pitch lasts 10 years so it's a 10-year investment.

"It's been fantastic. We've always been backed by previous owners, Steve Morgan and Sir Jack Hayward. 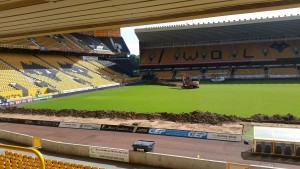 "With the new level of investment from Fosun we'll obviously benefitted from a new pitch and everything that comes with that."

The pitch measurements will be decided by new boss Nuno Espirito Santo ahead of the new season.

Work on laying the pitch will be completed in time for the home friendly against Leicester on July 29. Before then two large machines will spend 20 hours a day for 15 days planting 20 million knitting needles - each 10 inches long - as the foundations for the surface.

Wayne added: "Over 8,500 sq metres the pitch will be level to a one millimetre tolerance.

"This season the winter was very good weather-wise and we had a great pitch. Last season (2015/16) we had a bad winter, it rained all the time and the pitch wasn't that good at all.

"The main reason we've done this is because you want your pitch to perform at its best in the worst of the winter weather.

"With this new construction it's 95 percent sand. So, in layman's terms, it doesn't matter how much water you throw at it, we will never have an issue with it.

"It stays perfectly level, you've got the stability of the 20 million fibres knitted into it and there's peace of mind on a matchday no matter what the weather throws at us.

"After the first game of the season you won't even see a footprint on it.

"With all these 10 inch needles in the pitch it doesn't move, it doesn't cut up, it hardly scars.

"It's better for injuries. The original (Desso) pitches were renowned for being hard, like astro turf, but the particle size has got larger and they've changed the sand so it's more forgiving on the limbs and softer than it used to be.

"The players will notice how perfectly level it is on the surface itself because you can keep that consistency throughout the season, rather than have a great pitch in the summer which starts to deteriorate in the autumn and then be at its worst in the winter.

"There'll be more consistency throughout the nine months. The players will notice how good the playing surface is for the whole season."