"Any club likes to see tens of thousands turning out for a fixture, but when the plan is to have them on the pitch, it's a bit of a nightmare for the head Groundsman."

To limit the damage, and ensure the fastest recovery possible, Alan worked out a plan with Scotts' turfcare agronomist Simon Barnaby, starting the process months in advance. Alan explained:" We started to lower the cut gradually, moving from our usual 25mm down to 20mm.This way, we hoped to maximise the air gap between the flooring and the grass - covering rather than smothering.

"The next step was to induce a kind of autumn 'hardiness', applying treatments to slow down foliage growth, enhance root development and generally toughen the sward. "We chose Greenmaster Liquid Autumn fertilizer (8:4:16) to start with, in May, providing plenty of phosphorus to feed the plant roots and minimum 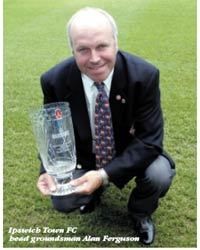 "Greenmaster Blade was also applied to further strengthen the roots. Blade is a carbohydrate, seaweed and trace element conditioner that is designed to improve the whole rooting zone by encouraging beneficial micro flora. Vigorous root growth and increased tillering was the result. "A second treatment followed in June, this time comprising the growth regulator Shortcut. Containing trinexapac-ethyl, Shortcut helps 'switch off' the foliage growth - reducing growth by at least 50 per cent. This treatment was vital in preventing the grass etiolating too much in the dark conditions under the flooring. As soon as the covers came off, attention was switched to coaxing the sward back into vigorous growth with a 23:0:0 liquid feed to kick things off."

And the result of all this effort and thought? With a mere five weeks between the covers coming off and the first football fixture of the season, Portman Road is a pitch to be proud of - easily justifying Alan's recent award of the Groundsman of the Year title.