0 Pitch quality on a roll 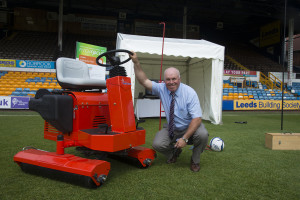 Football pitch and sports turf managers could look at some of the techniques used by greenkeepers to further enhance the quality and cut the cost of maintenance, according to Alan Ferguson, Head Groundman at the FA's flagship facility, St George's Park.

Speaking at PitchFocus earlier this year, Alan reported one of the latest innovations has been a trial to alternate mowing with a turf iron roller, compared to the conventional daily cut.

The intention had been to create a more consistent playing surface and greater ball speed off the top, but he had also identified improvements in turf health and valuable time savings.

Alan reported that rolling with the Smithco Tournament Ultra roller took half the time of cutting with a pedestrian mower, which has released time to undertake other essential pitch maintenance operations.

That has helped to keep the site in pristine condition demanded by the busy schedule of the site's users - which has seen pitch use rise to nearly 90% of capacity.

He believed that, used in combination with Primo Maxx, rolling had alleviated stress on turf plants, which had led to better surface density, greater wear tolerance and faster recovery after intense training sessions.

e is used at a rate of 0.8 l/ha from mid-April until turf growth slows in the autumn.

He highlighted one advantage of the turf iron is that it maintains a more uniform pressure across the surface, compared to a conventional tractor trailed roller. "We have seen instances of extremely heavy rollers being used on sports pitches, which could be counterproductive to soil structure and plant health. For those using trailed rollers, 375 to 400 kg would appear to be the optimum," he advised. 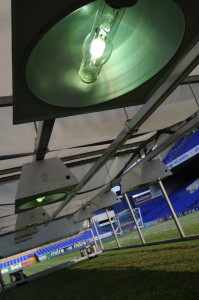 He reported that the research has shown fibre-sand constructed pitches are more susceptible to compaction, but can be adequately managed within the aeration programme; Desso-type pitches appear less affected by compaction.

However, he warns that managers of natural soil-based pitches need to be wary of smearing when rolling, especially if the soil has a high clay content or in wet conditions.

"We are now looking to integrate turf iron rolling within the overall management regime," he added. "That is likely to include rolling after most sessions across the site in the future."

Spotlight on winter Primo use

The increasing use of artificial lighting rigs in football and winter sports pitches has transformed playing conditions through the season, with stronger turf growth and retained grass cover.

The technology has enabled groundsmen to effectively counter the dark shadows cast by tall stands and stadia, as well as excessive wear in goalmouth areas.

It increases the concentration of chlorophyll in the leaf and stimulates a denser turf leaf surface; which will act to make better use of both available natural light and supplementary artificial lighting," he said.

Simon also highlighted that the stronger plants and greater root mass stimulated by Primo Maxx further improve surface stability and wear tolerance, as well as the turf's ability to recover faster after play. 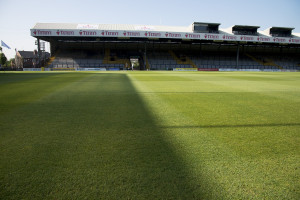 ve turf management in low light or shaded conditions has shown that Primo Maxx could effectively compensate for up to 70% reduction in light intensity and still maintain the same turf health and vigour as full sunlight.

"Lighting rigs are a significant investment in capital cost and expensive electricity consumption. Improving the efficiency of their use and getting the best possible results in improved playing conditions is essential," he added. "Where the techniques continue to stimulate growth, Primo Maxx will ensure the energy is channeled into plant strength and turf quality."