When the Madejski Stadium, home to Reading Football Club and London Irish Rugby Club, underwent its first major pitch reconstruction for ten years, contractors, MJ Abbott and Premier Pitches, worked closely together during the time-critical close season over a six-week period. The venue became the first to have a dual-use pitch with the added durability of the SISGrass hybrid system turf technology.

After removing around 15 miles of existing pipework, MJ Abbott completely reconstructed the pitch, taking the old one out and starting from the bottom up, reshaped all the sub-base levels, reinstalled the drainage, undersoil heating and rootzone layers. Premier Pitches took responsibility for pitch cultivation and seeding. The company also maintains their involvement by way of annual pitch renovation.

During the later stages of construction employing effective irrigation to the grass root zone was critical to enable the final pitch levels to be accurately graded and to allow for successful cultivation and seeding of the new surface. Nathan George, Contracts Manager at MJ Abbott was confident that selecting Rain Bird products https://www.rainbird.eu/professionals/applications/sport-field-irrigation for the new pitch's irrigation requirements was the way forward: "The irrigation cycle is determined by both the weather in general as well as the effects of sun and shade caused by the inherent design of the stadium. We had a high level of confidence in Rain Bird irrigation technology for the project because of the overall quality, performance and versatility of the company's products," he says.

Rain Bird's highly durable 8005 rotors https://www.rainbird.eu/products/rotors/8005-series-rotors were specified for the central area of the pitch and with their easily adjustable arc from 50° to 330°and 12 to 24.7 metre radius were well suited to the application. Featuring Rain Curtain™ nozzles, the 8005 rotors ensure optimum distribution and close-in watering resulting in superior irrigation uniformity.

Rain Bird's 950E rotors were selected for the pitch perimeter as they are specifically designed to withstand the rigours of sports field irrigation applications, including hybrid grass. They offer full or part circle and irrigation up to 345° and feature a top adjustable pressure regulator, factory preset at 5.5 bar.

Rain Bird's Site Control System, used by Adam Grantham Reading Football Club's Grounds Manager and his team, can be controlled both through a PC and remotely through an iPad. It gives complete control over the irrigation and the flexibility to set up and match the irrigation cycles precisely to the prevailing and predicted weather. The software provides a quick and easy way to build irrigation schedules and programmes based on set parameters. The system's many advanced features include an interactive map interface that displays the position and operation of individual rotors, displaying real-time irrigation activity and for close monitoring of the system.

Adam Grantham commented: "The Rain Bird system is great and very user friendly, and can be as complex as you would like it to be. I have found it very easy to monitor moisture levels with the sprinkler system coverage being very consistent. The pitch is holding together well and receiving good feedback from the coaching staff and players". From MJ Abbott's viewpoint the success of the Madejski project was reflected by the fact that the company has gone on to secure further contracts from Reading FC for new training ground pitches. 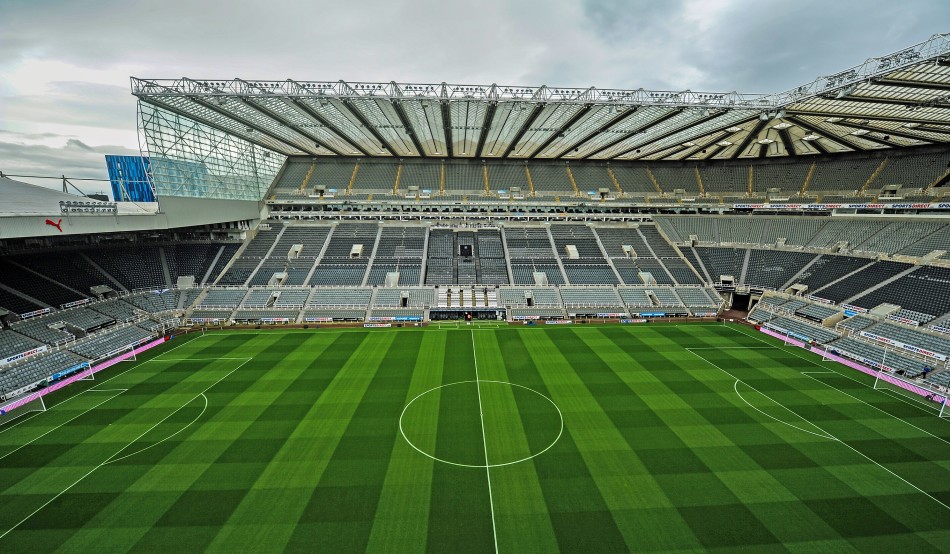 Meanwhile when the decision was made to install a new playing surface and irrigation system before the start of the 2017-8 Premier League season at Newcastle United, a fast response and close cooperation between pitch contractors MJ Abbott and Premier Pitches was essential. As part of the project the club had to select a new fully automatic pitch irrigation system.

After removing the existing vegetation and old fibre root zone, MJ Abbott removed the existing lower sand layer to a suitable depth to expose the existing slits within the drainage system that was to be retained. An imported rootzone was laid to re-establish the original pitch levels, followed by cultivation and seeding carried out by Premier Pitches. The new pitch was then stitched with the SISGrass hybrid pitch system. The St James' Park project was successfully delivered a week ahead of schedule.

For the new irrigation system, MJ Abbott had to take into account the particular conditions created by the configuration of the pitch within the stadium. Nathan George, Contracts Manager, explains: " The stadium design means that at certain times of the day, the southern end of the pitch is in full shade with the remainder in full sun. Complete control over individual sprinkler application rates was therefore essential. We knew from experience that Rain Bird offers high quality products for stadia applications in terms of rotors, sprinklers and automatic irrigation control systems so would be an excellent partner for this project." Rain Bird 950E valve-in-head sprinklers were selected for the perimeter and the corners of the pitch whilst 8005 pop up rotors were chosen for the central areas.

Integral to the new pitch is the SISGrass Hydrobox system which was developed specifically for use with pop-up irrigation systems, including Rain Bird. Nathan explains " Hydrboxes are installed to all central pitch sprinklers. The box is filled with rootzone and stitched in the same configuration as the main pitch. To access the sprinkler for maintenance purposes, the Hydrobox is simply lifted out, leaving the sprinkler clear of any pitch construction. To reinstate the pitch surface around the head the Hydrobox is lifted back over the sprinkler and replaced into the hole." The system not only makes maintenance much easier but also allows grass to grow right around the sprinkler head for an optimum playing surface.

Rain Bird's IQ Cloud Platform, used in conjunction with an ESP-LXD controller fitted with a network communication cartridge, was selected to give the groundstaff a real time fully automatic remote irrigation control system. The installation can be managed remotely by a web enabled computer, tablet or smartphone connected to the internet.

The ESP-LXD controller enables employment of IQ-Cloud's full suite of remote water management tools. Groundstaff know in real time which zones and irrigation systems are operating and can access information on flow rates and performance. Reports can be automatically created and shared, saving time and providing information on irrigation times, total water usage and other significant data. Automated e-mail alerts and alarms can be set up to help manage potential problems.

The overall result has delighted Eddie Rutherford, Stadium Manager, who says it is probably the best the pitch that the club has had since he has been there. The quick planning required and success of the project was helped by Premier Pitches' long term experience at St James Park and Director Russell Latham also recognised the experience and expertise of MJ Abbott. " We have worked with MJ Abbott on pitch construction projects for over five years now. Their efficient and meticulous way of approaching a project from design and planning to delivery is everything that our key clients want to see."