0 Pitch renamed in honour of groundsman 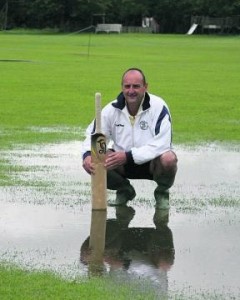 Freeland's football and cricket pitch is set to be renamed to commemorate a groundsman who died last year.

Les Hole died on November 30 after a collision with a lorry at Smiths of Bletchingdon's Burford Quarry.

The playing field, used by Freeland Football Club and Freeland Cricket Club, will be renamed the Les Hole Playing Field.

The father-of-three, who died aged 52, spent his evenings maintaining the village field and pitches.

He had also been a captain at the cricket club, where he had played for about 20 years.

Mr Hole's eldest son Simon, 30, said: "He did so much work for the football and cricket club. He was down there every night from April to September."

Les's dedication to the job inspired Simon's own career as a groundsman at Cokethorpe School, near Witney. He said: "As a kid, my brother and I were always down there helping my dad.

"That's how I got into my job, learning from him on the pitch."

Freeland FC secretary Ben Symonds said: "We were having a think about how we as a football club could remember him - we wanted to do something ourselves.

"We could have had a cup for the football club, but that would have been finding an award for the sake of it.

"We had a chat and thought there would be no better way than remembering him on the field.

"He'd be down there every evening. Everyone called the shed there Les's Shed. It was done lovingly - it was his pride and joy."

The club is now fundraising to install a plaque at the playing field.

Mr Symonds, 32, said: "We have done a collection through local people, anyone who wants to donate can. We haven't counted it up yet, but we've banked over £200 so far.

"Anything that's left over we'll take to the Hole family for them to give to a charity of their choice.