1 Pitch renovation strategies are paying off at Uxbridge Cricket Club 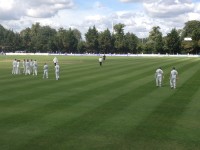 Pitch renovation strategies at Uxbridge Cricket Club in Middlesexare proving highly successful for head groundsman Vic Demain, despite this year's weather being 'a groundsman's nightmare'. Following technical advice and support from seed breeder Limagrain UK, Headstart-treated seed mixtures which germinate more rapidly have been sown in the square, and fescues have been added to the outfields to improve drought tolerance. Ongoing trial work is enabling Vic to make the necessary decisions when it comes to end of season work.

In 2008, Uxbridge Cricket Clubwas appointed asthe out ground for Middlesex County Cricket Club for when test matches (and Olympic events) are taking place at Lord's.So the Uxbridge venue not only hosts a high volume of club games, but it is also used to the demands and pressures that come with hosting first class fixtures.

To ensure a quality playing surface throughout the season,head groundsman Vic Demain has adopted some specific strategieswith his choice of seed mixtures and cultivars.

On the cricket square, the perennial ryegrass mixture MM50 is used. Vic first started using this in 2007, when an autumn renovation had partially failed.Aquick solutionwas needed the following spring. After approachingLimagrain's Craig Spooner for advice, Vicoverseeded with MM50, which is treated with Headstartto speed up germination rates. He explains: "We verticut hard in three directions and then overseeded. Thankfully it germinated quickly and eight weeks later, we were able to host a county cricket game."

Since then he has continued usingMM50 on the cricket square: "The Headstarttreatment allows us to turn pitches around a lot quicker due to rapid germination- within 10 days -and it makes a good recovery. Both features are incredibly important in our situation."

Last autumn, Vic Demain took a new strategy with the renovations on the outfields. He explains: "There's only about 2 inches of top soil here, with gravel underneath. So in a normal summer the pitch burns out and looks white! After discussions with Limagrain's Craig Spooner we tried a new approach. The pitch was scarified quite hard, and turf humus applied to help retain moisture.We thenoverseeded with 35g/m2 with a special Limagrain seed mixture that contained fescues, to improve both the quality and drought tolerance of the outfield.

"Certainly the outfields germinated well. However, this year, of course drought has not been a problem!The rain has created some unprecedented growth, and in early August we were mowing four times a week instead of the usual once a week!"

"This autumn, the same special fescue mixture will be used in the renovations, but we will only need a seed rate of 20g/m2 this time."

The wicket strips have been another area where Vic wanted to try a different approach. He explains: "I'd wanted to try sowing straight cultivars, as I think that with three or more cultivars in a mixture there can be a slight difference in growth pattern between the varieties, and this can affect play."

Three years ago, he sprayed off two wicket strips, scarified and then sowed one with Malibu and the other with Melbourne - both perennial ryegrasses being amongst the top-performers on the STRI lists. Vic has been delighted with the results: "A recent 40 overs match played on the Melbourne strip has been one of the best matches we've had here. Whilst it is not always ideal to have a single cultivar making up the sward, it does enable me to see the different characteristics and playing qualities of individual components within a mix."

In what has been a nightmare year for keeping games pitches in good order, Vic's strategies have paid off with Umpire's marks for the Uxbridge Club's pitch being rated at least 'good' throughout this past season.

He adds: "Over the years I've tried most of the top grass seed mixtures and MM50 has stood out from the rest. It not only germinates faster, but it has reliably produced a quality playing surface and recovers well too."

For more information on the range of MM mixtures for cricket grounds, groundsmen should contact Limagrain UK on 01472 371471, visit www.limagrain.co.uk/mm, or contact their nearest MM distributor.