by External source
in Industry News
on 10 Nov 2014 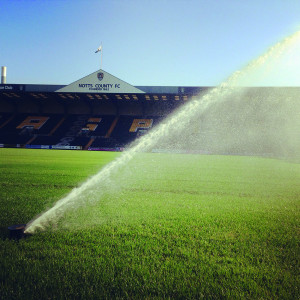 Stadium Manager, Greg Smith, is very proud of his teams work over the past five months and he believes the Meadow Lane turf is the best he's seen during his tenure.

Greg, along with assistant groundsmen Trevor Hutchinson and Jack Farmer, have already successfully managed twelve games at the Lane this season, including three different teams - the men's, the ladies and also Nottingham Rugby. In fact, in September, all three clubs were in action in the space of twenty-four hours, which was the first time the pitch had to deal with both sports.

Greg explained: "I think the Meadow Lane pitch is looking superb, we've had plenty of games on it already with the ladies finishing their season last month and Nottingham Rugby starting their campaign."

"The pitch has come through the first two months really well and it's got better. It's probably the best surface that our team have produced since we've been here. We are really pleased with it. We had a very early start on it, we had a good summer, a warm September, we altered our fertiliser regime, and there's another little factor - we've been successful. We've got good results."

"The pitch lights have been on and it's the first full season we've been able to use the rigs. I've been very pleased with how the turf has reacted to the Ladies." 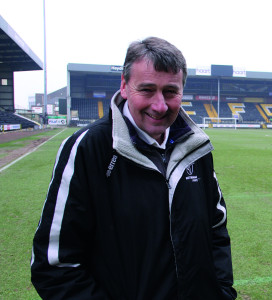 "Take last month for example, we had three games on the pitch in a weekend and I'm pretty sure that's unprecedented for the club. We had Oldham, then the ladies playing Chelsea and, less than twenty-fours after, the rugby were on here. It was amazing to have them all there. It was a tough challenge, but we coped and the pitch coped really well. It didn't cut up at all and we are seeding all the divots well."

"We are coming into autumn now and this is where the pitch will thrive. This will take us into the winter really well."

"We've had plenty of support, as always, from the board and the management. During the week, we've only had one training session on here and that was for the Open Day, so it's giving the pitch time to recover and that's important."

"The training base at Arnold is fantastic. We all worked hard during the summer and we've now got eight pitches up there which we prepare for our players and the Arnold community."

"Trevor has been working up there; it's his project and he's been managing it really well. They've produced some fantastic surfaces. There are a lot activities up there, the ladies and the men train, the Youth Team play their home games up there and of course there are all the community events which Arnold hold."

"What we are trying to do is mirror all the pitches up there, on Meadow Lane, and it's progressing well. It's great to have a solid base for the club. When I arrived, it was always the club's plan to have a training ground and, for one reason or the other, it never materialised." 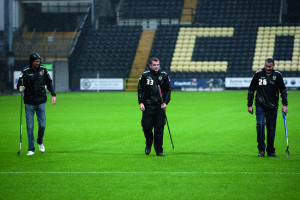 "The old Highfields site was great for us and we worked really closely with the city council, but we've moved on from there and Arnold will be the future of the club. It's an enjoyable place for everyone up there. The players are kept away from Meadow Lane and, as the Gaffer has said previously, it makes this ground special on a matchday."

"Everything looks smart and we are always trying to improve on this, we can never stand still. I think we have a Championship stadium in my eyes and I'm proud of what we have here."

One negative for the club's maintenance team is the news that Assistant Groundsman, Jack Farmer, is leaving the club for a similar role across the river at Nottingham Forest; a team he supports.

Greg added: "Unfortunately, Jack is leaving us, but we wish him well. He's been here for a year and we are very proud we've brought him through. We showed him the ropes and he's got a fantastic job over the river."

"I'm sure this will open another opportunity up and we will be looking to train up another young protégée. There's not many Football League clubs where you can learn so much with different sports; it's a great grounding, excuse the pun, for someone to learn how we look after the surfaces."