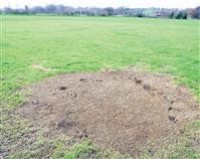 A group of youths who lit a huge illegal bonfire on a South Derbyshire cricket pitch could 'wreak havoc' on a team's season.

The fire-damaged pitch at Ticknall Cricket Club's base in ReptonTicknall Cricket Club revealed that its second ground at Broomhills Lane Playing Field, in Repton, was vandalised after a gang gathered various materials - from wood to rope - and set them alight, leaving a section of scorched earth right in the middle of the cricket pitch.

Now the team's groundsman is working hard to try to repair the damage but fears that nearly 40 games could be in danger if current solutions don't work.

"It seems that a group of youths had set fire to everything from rope to wood and left a five-yard square patch ruined.