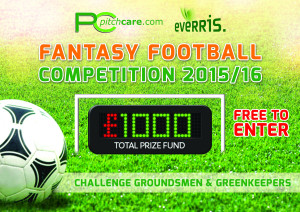 Well, who'd have thought at the start of the season that the tinker man Ranieri's 5000-1 outfit would be crowned Premier League Champions, a huge victory for Leicester City and for football.

The odds for the winner of this season's Fantasy Football Competition weren't anything like as high, but nonetheless he made a very impressive leap up the table.

Peter Wilton of professional lawncare company Nulawn finished in 8th place in last season's competition and, in the end, had a comfortable victory, winning our top prize of £300 by 40 points.

Last year's winner, Mike Sage, achieved a very creditable 5th spot; but, disappointingly, once again none of the Pitchcare team found themselves amongst the prizes!

Congratulations to all our winners

Managers of the Month

Pitchcare would like to express our thanks to this season's sponsors, ICL, and to all Pitchcare members who took part.

Winners need to email: sian.workman@maxwellamenity.co.uk with their contact details. Subject to meeting the terms of entry, a cheque will be sent out to you or, in the case of the Managers of the Month, an item of Helly Hansen clothing to the value of £50.

Details for the forthcoming 2016/2017 Fantasy Football competition will be posted online at Pitchcare.com soon.