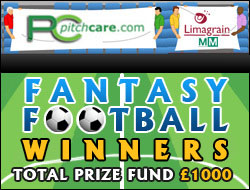 So, goals scored after the 90th minute will for the foreseeable future be referred to as 'Aguero Time', such was the significance of the Argentinian's late show at the Etihad which sent the blue side of Manchester into a rapturous rendition of their adopted 'Poznan celebration'.

There was no such drama at the top of the Pitchcare & Limagrain Fantasy Football League where run-away winner, Greenkeeper James Rowles topped off an amazing performance from the Henbury Golf Greenkeping team (winners of the £150 Team Prize) to beat the other 168 participants to claim the top spot with a commendable 70 point gap to 2nd placed David Figgins-Barrett from the Senior Golf Construction Group.

Pitchcare's own Kiran Contractor finished a respectable 4th, whilst Manchester City Groundsman Gary Conway celebrated a second 'significant' success for the club by also finishing in the prize money.


Congratulations to all our winners:

I would also like to make a special mention of John Farrell - Baileys of Norfolk, who sadly passed away recently and who enjoyed participating in our Fantasy League. John's team the 'Three little birds' were amongst the top grouping until he sadly lost his battle with stomach cancer in February this year. He was an avid player of the league and, in tribute to him and his participation, we will be entering the 'Big C' team in the 2012\2013 league with any winnings going to John's chosen charity.

Pitchcare would like to express thanks to this season's sponsors Limagrain UK and to all who participated this season.

Winners need to email: dan@pitchcare.com with their contact details. Subject to meeting the terms of entry you will receive a cheque following this date. Details for the forthcoming 2012\2013 Fantasy Football competition will be posted online at Pitchcare.com in the next month.