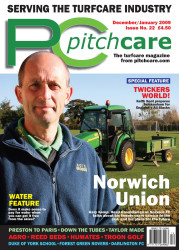 They say you can't judge a book by its cover, but in Pitchcare's case, you can!

The turf industry's favourite publication has been shortlisted for Best Front Cover in a Trade Magazine in 'The Maggies', a national poll to celebrate and award the UK's best magazine covers over the past year.

Now you can help make the turf industry's favourite magazine a winner by casting your vote for Pitchcare at www.themaggies.co.uk

Created by Pitchcare's talented designer, Peter Britton, and taken from the December/January 2009 issue, the cover is one of five shortlisted in the Trade category and features Gary Kemp, Head Groundsman at Norwich City Football Club.

Andrew Burge, CEO of iSUBSCRiBE, who initiated the annual awards, said "This is the second year of The Maggies, and I think we've come a really long way. The range is fantastic, and the calibre's absolutely second to none. In judging the 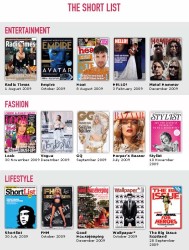 shortlist I think we've come up with a really good selection and it'll be fascinating to know what the public make of it."

Jim Bilton, who has chaired the judging panel for the past two years, said "We've had a lot more entries this year. Clearly The Maggies is growing in popularity and profile within the business."

Peter Genower, ex editor of Chat, TV Times and What's on TV, said of the criteria for selecting the shortlisted covers, "The most effective selling covers are often those that combine aesthetic value with raw commercial appeal. Successful covers sparkle with energy and include six guiding principles. They have a great central image, and grabbing cover lines offering tangible benefits - 'what's in it for me?'."

"Covers need impact; they stand out from the crowd, often with a clean simplicity, and reinforce the brand values and personality. The shortlisted entries for this year's The Maggies show that British magazine covers lead the world in commercial guts and design flair."

Chris Llewellyn, President & CEO of FIPP, on why The Maggies is so important to the magazine industry said, "Great covers have to satisfy so many criteria and they must be creative, ideally controversial or comical, 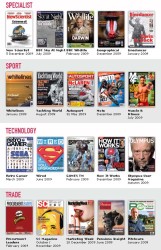 but above all, commercial because magazine front covers are not isolated works of art, they have to stand out. Part art, part science, it's hard to get it absolutely right. That's why The Maggies have an important role to play in showcasing and celebrating great covers."

Sally Cartwright, ex Publishing Director of HELLO! Magazine, agrees, "Covers are absolutely crucial. Unless somebody likes your cover, at least enough to pick it up and look and see what's inside the magazine, you've lost. Without a good cover you just aren't going to sell your magazine."

What the judges thought on the quality of entries this year…

Barry McIlheney, CEO of PPA: "It's been incredibly difficult to pick the best covers in any of these categories, because all of them have something going for them. Some of them are absolutely outstanding, and to boil that down is a really difficult job. It's a fantastic standard and makes me thing the magazine industry is in pretty good shape."

Peter Jackson, twice voted "Magazine Editor of the Year" and a leading magazine creative consultant: "I think there's more diversity this year. I think a lot of the smaller magazines are really showing the way to the big magazines, they've been more adventurous."

Eve Pollard, second ever female editor of a national newspaper: "The calibre of entrants has been very, very high. It's been a tough year for magazines, as for everyone else, and you can see people have worked hard on selling their magazine, and there's only one place to sell it, which is the cover."

Voting closes at midnight on 20th June and the winners will be announced the following day.