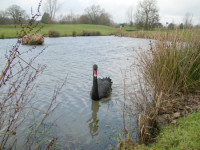 With over 16,000 active Pitchcare members currently working in the British turfcare industry, we are in a good position to provide a vital early warning system to combat the threat of a potential bird flu epidemic in the country. Pitchcare members can play an active role in providing vital information about bird deaths they find on their land.

Many of our Groundsmen, Greenkeepers and other facility managers are responsible for maintaining and managing some of our finest wild life corridors, particularly golf courses and large sporting complexes such as schools and local open spaces.

With the country on high alert due to the recent reports of bird deaths in France it is imperative we inform the appropriate authorities of any bird deaths found on UK land. Following confirmation that a duck which died of bird flu in France was infected with the lethal H5N1 strain of the virus, the Government said it was "more likely" the disease would reach Britain.

A spokesman for the Department of the Environment, Food and Rural Affairs (Defra) said nine swans had been sent for tests over the weekend after members of the public called the helpline. Two each were from Bury St Edmunds, Winchester and Preston, while individual birds were found in Shrewsbury, Thirsk and Hertfordshire. "All the tests have so far been negative but testing continues," he added. "Obviously, we are at a heightened level of surveillance given the case in France."

The spokesman was unable to confirm reports that a dead swan found in Great Abington, Cambridgeshire, was being tested at the EU's laboratory in Weybridge, Surrey.

If you find a dead bird it is important that you report it immediately to the relevant Local Authority or DEFRA.