Pitchcare's five minutes of fame will be a new feature on the site offering the opportunity to promote individuals who have dedicated their life and careers to the sports ground industry. I think it is important that people are recognised and valued for their contributions to the industry. The profiles will include details of career, current role and their aspirations for the future. My aim is to feature and include as many people as possible, at all levels, who have played a part in promoting our diverse industry. 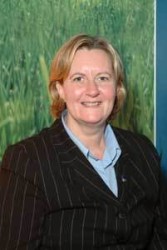 
Jayne Leyland is one of the most experienced grass seed specialists in the professional turfcare industry and a familiar face with many greenkeepers and groundsmen.

Born in Cheshire, Jayne attended Reaseheath College where she attained a Higher National Diploma in Horticulture (Golf Course Management). While at college, she spent six weeks at a golf course in Vienna, Austria, preparing the course for a PGA Tour event.

In 1993, she took her first job as a greenkeeper at the East Sussex National Golf Club, near Uckfield. Her most recent greenkeeping appointment was as assistant course manager at Chart Hills, in Kent, where she spent three years.

1999 saw Jayne moving away from hands-on greenkeeping when she joined Barenbrug as area manager (north). ?It was great opportunity for me,? explains Jayne, ?to be involved with the world?s leading specialist grass seed breeder. It also enabled me to meet a broader range of people and use my customer service experience.?

Jayne?s role at Barenbrug is to provide technical support and advice to a wide range of customers, who include seed distributors, greenkeepers, groundsmen, turf professionals, turf growers, local authorities and contractors. She also liaises on a regular basis with agronomists, keeping them apprised of the latest developments in Barenbrug?s product range.

Jayne says: ?My job is to ensure Barenbrug customers receive a total solutions package. It?s more than just providing a bag of seed, it?s trouble-shooting and working closely with them to determine their individual needs, recommending the right product, monitoring progress and becoming part of their team long term.?

In addition, Jayne also runs regular advisory and technical seminars for her customers, where they are kept up to date with Barenbrug?s products in development.

In July 2003 Jayne was promoted to senior area manager, adding another dimension to her role in the company. ?As well as looking after customers, I?m also more involved with marketing now, such as the production of our centenary Amenity Grass Seed and Wildflower Mixtures catalogue, which has been a great success,? she says. ?Another very interesting and important element of my new role is being part of the European Turf Committee for the Barenbrug group, which plans new cultivar selection, mixtures analysis and European marketing on the amenity side.?

Jayne also assesses the performance of Barenbrug cultivars which are being independently trialed at the STRI. As part of her new job, she has also been instrumental in setting up a UK trials programme, with the help of Barenbrug?s European product development manager Gerard van ?t Klooster and Barenbrug UK production manager Andy Sadler.

?Barenbrug is a very innovative company to work for?, adds Jayne. ?It?s always leading the way, developing new, specialist products and keeping one step ahead of customer requirements. I am proud to be part of that.?