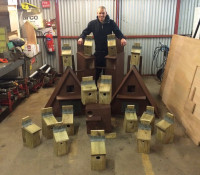 The plight of bees has been much reported in this publication, with one man in particular being responsible for highlighting concerns and 'doing something about it'. That man is Edward (Eddie) Ainsworth, Course Manager, Avro Golf Club, who has spread his love of beekeeping around like honey spread on toast.

In this article, the 'bee man' turns to another of his passions, bats, and explains how he is helping to increase their numbers at his course

Spending many early mornings and late evenings at work preparing the course for a big competition has its rewards. Not just seeing the course in its best condition, but these unusual hours of work have allowed me to see the many aerial displays by the bats that feed on our little course.

Bat populations have declined dramatically in recent years. In the UK, bats only eat insects, and changes in agricultural practices appear to be an important factor in declining bat numbers. Hedgerows and ponds, both widely used by bats, have also been lost from the countryside. 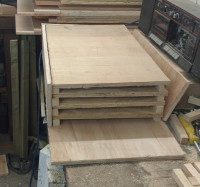 We have carried out much work at Avro Golf Club to increase insect populations, including both grassland and wildflower areas. A drainage ditch is being dug out below the water line to retain water and encourage insects. We are also working with our neighbouring farmer to reinstate hedgerows to encourage insects, along with many other benefits that they provide. Plus, we have an established pond on our site and the River Dean running alongside part of our course.

I decided to help these beautiful night flying mammals by putting up some bat boxes, but I had no idea where the bats liked to roost or the type of bat box to build. My first thought was to use a mature tree. However, even though we do have plenty of mature trees, there are very few in the right place for a bat box, i.e. where it will not be hit by golf balls!

After much research into bats and types of bat boxes, I decided to place bat boxes close to the hedgerow around the perimeter of the course. 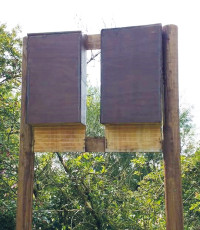 For the type of bat boxes I had in mind, the hedgerow was the perfect location. Hedgerows, also known as linear habitats, are important foraging areas that provide an abundance of insects and bats use them to move between different foraging sites. Two other reasons why this site is perfect for bat boxes are that it is close to the River Dean, for additional foraging, and that it is alongside a public footpath, to create awareness of bats to the general public.

I investigated internet sites and found many offering free diagrams to make your own bat boxes at very little cost, but I wanted something different, and the only ones I could find would have cost £100 plus. Being on a small course with a limited budget, buying one was not going to be an option. So I decided to build my own with spare wood I had left over from boarding out my sheds. I went with a design found on the internet called a 'maternity' box. This box is designed for larger roosts or maternity colonies.

Over the winter months, I set about making two maternity bat boxes. I painted the boxes a dark colour, to increase heat absorption. The vertical landing board was grooved using a circular saw, these grooves continue internally and cover all boards to ensure the bats can cling on and climb up inside the box. 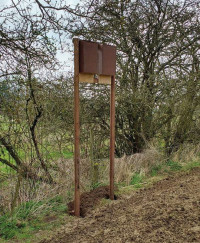 The two maternity bat boxes were erected at the beginning of April and, just as I wanted, the strange shaped boxes did indeed create a lot of interest. My apprentice, Wayne, and I were being asked many questions by golfers and members of the public.

I have also built another type of box, called a roosting box, using the Kent design. This box is a lightweight box and very easy to make. I have located several of these boxes on mature trees on a banking that runs through the centre of the course, well away from stray golf balls. It is a wooded area, so a good site for roosting bats.

These boxes have also been painted a dark colour to help retain heat. This design of box can also be erected on other structures, such as buildings or on the side of your clubhouse. The boxes can also be put up facing in different directions to provide different conditions. The Kent design is also a great box if you want to teach children how to build a bat box.

Many articles about bat boxes say that it can take a number of years before bats find and use your new bat box. I was, therefore, not expecting to find anything in the boxes this year. However, one late afternoon in June whilst being held up by golfers, I decided to have a little look inside the boxes using the torch on my phone. Not trusting my eyes I had to take another look, but there was no mistake; we had bats. Yes bats in my boxes, in less than three months, which goes to show that if you provide the box, then bats will find them.

Needless to say, after this success, I have a number of sites already picked out on the course to erect more boxes. Fingers crossed, they will be inhabited as quickly as the first two boxes.

To the bat cave! https://www.pitchcare.com/magazine/to-the-bat-cave.html
The Bat Conservation Trust: www.bats.org.uk
For more information on bats why not follow Bat Warden and Bat Carer Lizzie Platt @HenlakeBats 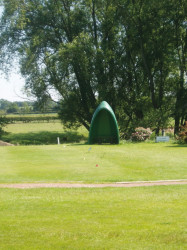 Avro is one of the great names in aviation history, the company being founded in Manchester in 1910 by Alliott Verdon Roe and his brother Humphrey. They had great success with the Avro 504 wooden biplane, of which over 8,000 were built for service during the First World War and for some years after. 1924 saw the company, now owned by Crossley Motors, move to New Hall Farm, Woodford in Cheshire.

In due course, Avro was owned by Armstrong Siddeley, Hawker Siddeley and British Aerospace, the name Avro officially becoming defunct in 1963. However, the name Avro lives on, being particularly associated with two iconic aircraft, the Lancaster bomber of the Second World War and the Vulcan bomber, one of the stalwarts of the nuclear, Cold War era.

The name Avro also flourishes at a little 9-hole course hidden away from public gaze down a narrow lane beside the Woodford airfield. It began life in the late 1960s when a number of employees were given permission to develop a course just beyond the boundary fence. That course had two holes! Over time, it has expanded onto additional land. 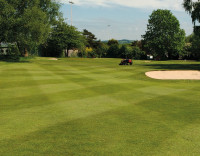 Strictly speaking, this is a 10-hole course because there are separate greens for the 4th and 13th holes. There are two distinctively different sections to the course, one running along exposed high ground adjoining the perimeter of the airfield, the other on lower ground, below a steep escarpment which is brought into play on three holes.

Despite its proximity to the aircraft factory, the course is delightfully rural, overlooking Cheshire farmland in one direction and with views to Kinder Scout and the Pennines in the other. Skylarks, buzzard and curlew are among the birdlife likely to be seen and heard. From time to time, you are reminded of the club's origins by the shelters to be found on a number of tees.

Each hole is named after an Avro aeroplane.