Rare toads and lizards do not live happily alongside 200,000 spectators. The STRI's Bob Taylor explains how sensitive ecological issues were addressed for the Open Championship at Royal Birkdale

The Open Championship, held this year at Royal Birkdale, is without doubt the most prestigious world golfing event, attracting over 200,000 spectators. Padraig Harrington again lifted the Claret Jug, following what was a superb climax, with both Ian Poulter and Greg Norman also in the running.

Padraig Harrington, speaking at the awards ceremony, congratulated Chris Whittle, Course Manager, and his team for the excellent condition of the course, and thanked The R&A for hosting and organising an extremely well run and highly successful event. I could not help but wonder if any of the players' or indeed anyone watching The Open, appreciated the level of organisation and effort that went into the event to ensure smooth running from set up through to the breakdown.

The R&A Championship Committee will, by the time this article is in print, be finalising details for next year's event at Turnberry. They will learn from Royal Birkdale, with post-Open review meetings that will analyse the successes and failures. Stuart Ormondroyd and Bob Taylor (official agronomist and ecologist to The R&A Championship Committee) involved in advising on course set up etc., will be reporting on the course restoration requirements.

From an ecological perspective a massive amount of work went into ensuring that important and sensitive ecological issues at Royal Birkdale were addressed and appropriately mitigated. Working on behalf of The R&A Championship Committee, I have been visiting Royal Birkdale annually to identify key areas of sensitivity and to recommend ongoing ecological course management work.

This year an early season ecological visit was undertaken (early March) to consider spectator routings to protect ground nesting birds, infrastructure placement and set up, and appropriate methods of working. The key sensitive zones were identified (skylark in particular will start to congregate and settle during early March, commencing nest building from mid to late March onwards). Once cut out, the maintenance routes were mown on an ongoing three weekly basis to discourage settlement later in the season.

Royal Birkdale lies within a much larger Site of Special Scientific Interest (SSSI), a designation administered through Natural England under national legislation. Moreover, the site forms part of a wider Special Area of Conservation (SAC), which gives international protection under the European Habitat (Conservation) Regulations.

The course supports natterjack toads and sand lizards, both of which are given international protection under the above legislation. Under the regulations it is an offence to disturb the habitats used by these animals or to directly, or indirectly, injure or kill them, and special licences are required to handle them.
Given all of the above, The R&A commissioned an amphibian and reptile survey through the Herpetological Conservation Trust, key areas of sensitivity were identified and, prior to The Open, these areas were cordoned.

Dr. Kelly Harmar from the STRI worked closely with the Herpetological Conservation Trust and Natural England in securing a Method Statement detailing mitigation measures aimed at minimising impact on these important species. 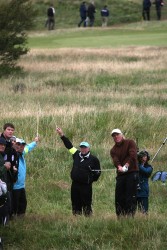 of not leaving piles of sand overnight. Loose, stockpiled sand could encourage natterjack toads to burrow. Indeed, contract teams were given a full briefing of best practice working by the Herpetological Conservation Trust before commencing with any set up construction procedures.

The greenstaff were given training for handling and dealing with protected species should the need arise, with Chris Whittle assuming a new role as Conservation Officer during the period of the event.

Scrub management is an important and ongoing concern at Royal Birkdale and one that is generally dealt with annually. This issue, leading up to The Open, clearly involves more fine tuning, i.e. ensuring that scrub does not overly impede spectator viewing. Greenstaff also had to ensure that no stumps were left above ground that could cause tripping or injury.

The R&A publishes a guide to the management of the links for wildlife and conservation at each of its Open Championships. For the Royal Birkdale booklet, Kelly Harmar visited the course during early spring to take pictures of wildflowers and animals on the course. She also produced much of the text for the publication which was made freely available at The Open. An electronic version of the guide can be viewed and downloaded from The R&A Open website at www.opengolf.com/ChampionshipGolf/TheOpenChampionship/TheCourse.aspx Also visit www.randa.org and/or www.bestcourseforgolf.org for additional information on the developing activities of The R&A.

The above represents just one small aspect of the effort and time that went into the preparation for The Open Championship, which clearly would not have been possible without the diligence and professionalism of all those that have contributed once again to its outstanding success.