0 Plant Disease? Identification is the key

Diseases are caused by fungal and bacterial pathogens. These are the most numerous infectious agents of plant diseases. If your grass has visible symptoms, the first step is identification to decide if the problem is a plant disease.

The definition of plant disease includes anything that adversely affects plant health. This definition can include such factors as nutrient deficiencies, mower damage, air pollution and pathogens, including nematodes and soil pests. Symptoms and signs are used to diagnose the condition of a plant. Symptoms are the physical characteristics of disease expressed by the plant. These can include wilt, galls, cankers, rots, necrosis, chlorosis and general decline.

Other signs of disease presence can include fungal fruiting bodies (such as mushrooms), mycelia, bacterial slime, presence of nematodes or insects, or the presence of insect holes and root damage.

Once you have determined that a real problem exists, and is caused by a living organism, you need to decide what type of organism may be causing the damage. Begin by establishing which plant part or growth stage is showing symptoms. Are symptoms showing on roots, tubers, bulbs, corms, seedling, foliage, stem, branches, trunks, flowers, fruit or on the entire plant?

Diseases can affect many parts of the plant: root symptoms include galls, discoloration or death to parts of roots; death of the entire root system or just feeder roots is indicative of many fungi diseases. Injury to the root system often includes yellowing of foliage, stunting or wilting. Seedling diseases, where the seedlings fail to emerge or die off, is referred to as damping off disease. Fungi such as Rhizoctonia, Pythium, and Fusarium are common and affect seedlings just at or below the soil line. Plants with dusty looking white growth are diagnosed as having powdery mildew (Erysiphe spp.) or downy and damp looking - downy mildew fungi (Phytopthora spp.).

Leaf symptoms are seen in many forms: discolouration (yellowing or shades of green), localised or indistinct patterns, usually indicates a virus; dead areas on leaves can be caused by fungi or bacteria. Necrotic areas caused by fungi may contain hyphae or fruiting bodies, particularly after incubation in a warm, moist environment.

Understanding the specific disease, or the life cycle of the pathogen involved, is necessary to ensure effective controls can be implemented. Three major factors contribute to the development of a plant disease: a susceptible host, a virulent pathogen, and a favourable environment. - the disease triangle. A plant disease results when these three factors occur simultaneously. If one or more of these factors do not occur, then the disease does not occur. The genetic makeup of the host plant determines its susceptibility to disease. This susceptibility or resistance may be determined by various environmental, physical and biochemical factors. Plant stature, growth habit, cuticle thickness, and stomatal shape are a few physical factors that influence disease development.

The plant's developmental stage may also influence disease development. Pathogens differ in their ability to survive, spread, and reproduce. Environmental extremes of temperature, light, or moisture can accentuate many diseases. Cool, moist conditions are ideal for many fungal pathogens.

Understanding the disease cycle is important when considering control options. Learning the chain of events that contribute to a disease helps point out the weakest links. Control measures can then be used to break the cycle. Most pathogens must survive an adverse period, usually winter, when they do not actively cause plant diseases. 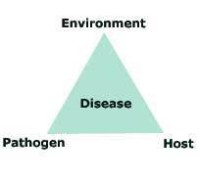 The pathogens that cause these diseases are always around and often laying dormant in the thatch layers waiting for the ideal conditions in order to become active. Once these spores are activated, and have found an acceptable host, they are able to grow and reproduce themselves, spreading new spores and infections to other areas of turf. This cycle continues whilst the right conditions prevail.

Spores are spread by wind, water, and by traffic. It is during periods of fluctuating weather, particularly changes in temperatures, that an outbreak of disease takes place. Attacks of soil borne disease can appear at any time of the year, foliar diseases prefer warm humid conditions of the spring and summer months.

The graphic below details the most common diseases found in turfgrass environments in the UK. The details are only a brief introduction to these diseases and their control. There are many good books available that can be obtained from specialist book sellers and organisations that detail and show pictures of these diseases and treatment recommendations.

Diseases can often be difficult to control. Most IPM strategies work very well and often involve the use of fungicide treatments to help suppress potential outbreaks of disease. As a general rule, fungicide applications should be made during the first signs of attack, since disease can cause substantial damage in a short period of time. In recent years there has been a decline in the use of fungicides. Recent studies have shown that constant use of fungicides often sees the disease becoming resistant to them.

There are many types of fungicides available and manufactured for use on amenity turf situations, all designed to perform and act differently. Systemic fungicides (azoxystrobin, trifloxystrobin, propiconazole, tebuconazole, prochloraz, thiophanate-methyl and carbendazim) all belong to three groups of fungicides - the strobilurins, the triazoles and the benzimidazoles. All have differing modes of action and should be used in sequence to avoid sensitising the fungal pathogens to them and avoid the potential of resistance. They have varying levels of systemicity. Non-systemic fungicides are contact acting, such as iprodione and chlorothalonil. They also have protectant activity. A complete list of available chemicals registered for use on amenity grass situations can be seen in the The UK Pesticide Guide 2008.

The main management tool for controlling pests and diseases is, by definition, an Integrated Pest Management strategy (IPM) that comprises a number of tasks and checks providing a comprehensive approach to controlling insects, weeds and pathogens in an economically and environmentally sensitive way, using cultural bipological and chemical management tools to reduce the incidence of infection in managed turf. The disease triangle is a concept of plant pathology and is based on the principle that disease is the result of an interaction between a host, a potential pathogen and the environment or weather conditions. Plant disease is prevented by elimination of any one of these three causal components.

Keeping the sward healthy and reducing the conditions that favour disease will be the first priority to keep disease from your turf. The following actions should help you achieve this:

• Carry out programmes of aeration to help keep the surface free draining.
• Inspect and monitor existing surface water drainage systems; ensure that they are working.
• Prevent moist conditions remaining on the surface by brushing/sweeping/switching the playing surface (remove dew).
• Apply a balanced fertiliser to keep the sward healthy. A soil analysis will identify fertiliser requirements.
• Control thatch layers as thatch provides a good environment for the disease outbreaks. Reduce thatch by hollow coring and scarification.
• Reduce the return of clippings. An accumulation of dead matter will increase thatch.
• Maintain Soil pH between 5.8-6.5; do not allow the soil to become alkaline.
• Check mowing heights and keep blades sharp.
• Be vigilant and treat the disease early to prevent severe attacks. Treat with approved fungicides.
• Reduce shade.

Pesticides are chemical substances and certain micro-organisms (bacteria, fungi, viruses and mycoplasmas) prepared or used to control pests. Pests include creatures, plants and other organisms that are capable of harming turfgrass. The term 'pesticide' covers products such as herbicides, fungicides, insecticides rodenticides, soil sterilants and insect repellents amongst others. Pesticides regulated by DEFRA's executive body, the Pesticides Safety Directorate (PSD), are used in agriculture, forestry, animal husbandry, food storage practice and domestic gardens. Pesticides regulated by the HSE's biocides and pesticides unit (BPU) are used as wood preservatives, public hygiene insecticides, surface biocides, rodenticides and anti-fouling products. As with the use of Herbicides there are statutory regulations to comply with when using pesticides to control diseases and insects in the UK. The following Acts and regulations apply:

The Food and Environmental Protection Act 1985:

Part III of the Food and Environmental Act 1985 (FEPA) came into force in September 1985. It aims to protect the health of humans, creatures and plants; safeguard the environment; secure safe, effective and humane methods of controlling pests; and to make pesticide information available to the public. FEPA was followed by the Control of Pesticides Regulations 1986 (COPR), as amended by the Control of Pesticides (amended) Regulations 1997 (COP(A)R). Along with consents given by Ministers for the advertisement, sale, supply, storage and use of pesticides, FEPA provides the means of pest control consistent with protecting the safety of people, animals and the environment.

Under the Control of Pesticide Regulations, all pesticides must gain approval before their advertisement, sale, supply, storage or use is permitted in Great Britain. Approval is a legal requirement and it is an offence to use non-approved pesticides or to use approved pesticides in a manner that does not comply with the specific conditions of approval. All approved pesticides are subject to routine review but may be reviewed at any time if any evidence emerges concerning their safety. If necessary an approval can be restricted or revoked entirely.

This act places general obligations on the employer to provide training and safety equipment, the employee is obliged to use the safety equipment provided. Under this Act, The Health and Safety executive has introduced regulations to control the risk to people in the workplace arising from substances hazardous to health, and that includes farms, forests, local authorities areas and so on.

Requires employers to prevent or adequately control the exposure of their employees and other persons who may be affected by hazardous substances. In addition, the Regulations require: the maintenance, examination and testing of control measures; the provision of information, instruction and training; emergency planning; and, in some cases, exposure monitoring and health surveillance of employees, and preparing procedures to deal with accidents, incidents and emergencies involving hazardous substances.

Under this act it is an offence to allow any poisonous, noxious or polluting matter to enter any controlled waters without the consent to discharge issued by the National Rivers Authority. Controlled waters include, rivers, lakes, canals, estuaries, coastal waters and underground waters. Other regulations and acts that need to be observed are, Control of Pollution Act 1974, The Water Act 1991.

Integrated Pest Management: utilises cultural, biological and chemical management techniques to balance the management of the turf. Used in the correct proportions, it will reduce reliance on artificial inputs to enable management of turf disease and pests. It allows for decision making criteria to be applied before chemical control of a pest or disease is taken.