0 Playing fields for the future? 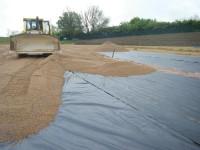 The Building Schools for the Future programme may be coming to an end, but such has been the standard of new and rebuilt sportsfields that James Pugh-Lewis, whose company has been involved with ten Local Authority projects over the last two years (and still has five in the pipeline), thinks that a benchmark has been set which will hold good for the future.

"Previously, we've carried out very little drainage on Local Education Authority schools, presumably because money was being spent elsewhere, and most of our schools' work was in the private sector," he says. "In the last two years, however, we have done several jobs in Birmingham, Derbyshire, Sheffield, Leeds, Barnsley and Nottingham, where new playing fields are being installed, or existing ones rebuilt, as part of the 'Building Schools for the Future Programme'."

"In virtually all cases, these have been drained to a very high standard with a two tier system comprising pipe drains and sand slits or sand bands. In some cases, we have installed full gravel carpets under the pitches. In many cases, the specifications we have been working to are similar to those we would normally see on a professional football training ground and not your local school playing field."

One such project is Rowley Regis Grammar School in Birmingham, originally built in the 1950s on a site with an industrial history, formerly used for mining and quarrying. "The old playing fields were on an existing prepared platform," explains Rob Everett, the STRI's Head of Sportsturf Design. Rob was commissioned by Interserve, the Project Managers, initially to assess the conditions on the site, then to make recommendations on how to achieve the optimum results and, finally, to monitor the new construction. 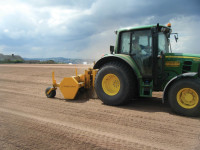 "Because this was a 'worked' site, a geo-environmental report was commissioned to look at the deeper ground conditions," Rob continues. "Some contamination was present and it was essential to ensure that this material was maintained at a depth greater than 600mm. Because the underlying ground conditions were so poor, with a variety of stony material present contaminated with glass and chemicals, there was little point in building a pitch in the conventional manner. Our design had to be appropriate to the site conditions, to enable effective and economical management by the authority's groundstaff after completion, and capable of withstanding the anticipated use to which it would be put. Although the initial cost might be higher, this construction was seen as a good long-term investment."

The STRI's design team put forward a 'grit raft' pitch profile consisting of pipe drainage covered by a layer of free-draining aggregate. The indigenous topsoil, ameliorated with sand, was to be replaced above the aggregate, and a system of gravel bands installed at one metre centres to ensure that surface water drained away quickly to the major drainage beneath. Another dressing of sand was stipulated before the ground was cultivated and sown with a blend of hard wearing Perennial Ryegrass seed.

The report, with these recommendations, was submitted and accepted by Interserve, before the specifications were issued to contractors for competitive tendering. J Pugh-Lewis Ltd won the contract and the company was able to continue its good working relationship with the STRI, which goes back some twenty years.

"The company is very well known to us," Rob confirms. "We're confident that the construction has been carried out to a high standard and t he grass establishment, following seeding at the end of July, is good. The pitch should come into use this season."

Despite the fact that the Building Schools for the Future funding has all but dried up, James Pugh-Lewis doubts that construction standards on local authority school playing fields will regress. He cites the sorry state of football league pitches in the 1970s. "They were mud baths," he remembers, "but, once the top clubs got new pitches, everybody wanted similar facilities and the trend filtered down, so much so that, by the turn of the century, poor pitches were few and far between and it was accepted that you didn't play on mud. I'm hopeful that, with the standard being raised in the new schools, there's going to be pressure on older schools to get their pitches up to scratch."

James's brother, Tim, thinks that one of the driving forces behind the improvements is that schools must now consider the playing fields as a 'classroom', and there may even be penalties if the pitches are not available for use. Judging by the escalating protests about the government's proposed school sport cuts, he may well be right. Gail Emms, the retired silver medal winning European and world badminton champion, was writing in the Observer as long ago as early December, voicing her disgust that the School Sports Partnerships were threatened, and gathering support from both current and former Olympian athletes. Now, after a hard winter of discontent, that protest may have reached a crescendo

"I think that now we've had the opportunity to build school pitches to high standards, facilities like these are going to be on the agenda," James concludes. "The government have defended the cut to school sports funding by saying that the previous initiatives weren't working, rather than it being a cost-cutting exercise, so we shall have to wait and see what new schemes are put in place." Let us hope that the pressure's on.