6 Plenty of Xtra Grass to cut at the Ricoh Arena

Plenty of Xtra Grass to cut at the Ricoh Arena 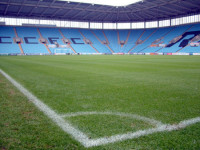 Coventry's Ricoh Arena is already proving a massive attraction. In the first three months, since the opening of the £113 million multi-purpose complex on August 20, more than 250,000 visitors have been through the gates.

The Arena is the home ground of Coventry City but, in addition to football, other major events have taken place including a Bryan Adams concert, the B2B Midlands exhibition and a three-day conference on behalf of the Football Association.

The playing pitch system is Xtra Grass, a patented grass reinforcement system manufactured by Greenfields. It is a woven artificial carpet that allows natural grass to grow through; the end result is 94% natural grass and 6% fibre content.

The cost for the pitch construction, undersoil heating and irrigation systems totalled about £500,000.

Michael Finch is the Arena's Head Groundsman, and he is very pleased with the way the pitch is performing and settling down. "There is another Xtra Grass system at Oxford, but our environment is very different. The Arena is much more enclosed, however we do have glass panels in the roof which have certainly increased the lux light levels." 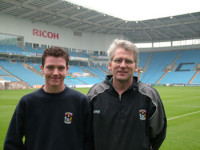 Michael has been involved with the new pitch since its conception and throughout the construction phase. Having the opportunity to see all the site preparation works and material installations has helped him have a better understanding of his pitch. He has also built up a good working relationship with all the parties involved, especially George Mullen of SIS, the company who installed the pitch.

According to Michael, working together and respecting the expertise and knowledge of each other has produced a pitch he is happy to work with.

Michael has been with the club for 18 years and he still feels a touch of sadness not being at Highfield Road which was such a major part of his life. He has many fond memories of the old ground, however he is relishing the new challenges the Arena now brings each and every day. How will it perform? What new skills can be learned? Not to mention the added demands and expectations of being a high profile venue.

"Working with the Xtra grass system will certainty test our skills as groundsmen," commented Michael. "We need to learn how to bring the best out of the system. Our initial priority was to maintain grass cover and increase root and shoot densities while at the same time maintain pitch stability. The turf has responded well to our maintenance regimes, and already the pitch is revealing some interesting information, particularly on its strength and stability and that's when the roots have only yet reached 100 mm in depth."

According to Michael the system seems to be providing a softer, more subtle playing surface than either the Desso or Fibre sand pitches.

"At first the players thought it was quite hard," said Michael. "However, the pace and bounce has continued to improve as the season has gone on and, now they have got used to it, they feel more comfortable on this surface than any of others." 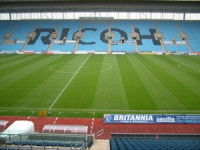 The root zone is only 125mm deep, therefore aeration practices are limited to this depth. Only a couple of aerations have taken place so as not to disturb the pitch too much in its early development. Compaction should not really be a problem yet as the pitch is still settling down.

A 14-21 day feeding programme has been devised by Scotts who have been working closely with SIS and Michael. Greenmaster and Sierrablen Fine fertilizer

products have been used to establish some longer term growth patterns, followed by some regular liquid feeds every 4-6 weeks depending on soil analysis. A winter feed of Seaweed had just gone on, with a NPK ratio of 8:4:16, to maintain colour and some growth during favourable soil temperatures.

At the time of the interview the soil pH was a tad high at 7.7 but Michael was planning to reduce this to 6.5 over the following months.

Five staff work with Michael to help him manage the Arena pitch and training grounds. His deputy is John Ledwidge (20) who has worked his way up to this post having first becoming involved at the age of thirteen when he use to help out on match days. John then took up a fulltime career in groundsmanship at the age of 16, making good use of his school grades to help him move swiftly through and pass NVQ levels 2 and 3 at Warwick College, Morton Morrell.

The other members of staff are John Baker, Andy Lee Neil Matts and Dave Rees who, like John, are currently enrolled on a course of education at Morton Morrell to improve there knowledge and understanding of the sport turf industry.

Michael spends most of his time at the Arena, often enlisting the help of John to prepare the pitch for matches. However, on match days, if required, all the staff can be called in to help prepare the pitch.

Michael nearly always does his final match preparations on the morning of the match, usually starting work at 7 am with a routine of inspection, mow/roll, over mark and water, if required. During the summer watering prior to games did take place, however, since September, only occasional irrigation regimes have been required due to the climate conditions. 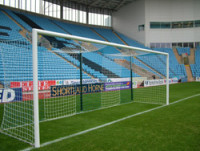 Once the game is over the staff commence divoting, with the aim to get all the scars and divots repaired before they go home. In the main, divots are few and mainly consist of slight surface scars. However, Michael has noticed that the damage done by blades is more damaging than studs. "Studs go in and come out, whereas blades cut off a swathe of turf," he said. "Blades are becoming a big concern for groundsmen at all football league clubs."

The onset of the recent cold weather has allowed the undersoil heating system at the Arena to be tested. The system is shared with other parts of the ground and, at first, there were a few teething problems. Michael is now happy that these have been sorted, "The system has now been running for a couple of weeks, maintaining a soil temperature of about 8 degrees C at the surface and about 10 degrees C at the base (125mm) depth." The intention is to maintain these temperatures to keep the grass plant active and stimulated.

Grass cover is very good, however Michael is keen to keep as much growth on his pitch as possible and, when temperatures are favourable, he will look to overseed any bare areas. He is prepared to wait until the summer renovations for any major oversowing to be completed, even though the window of opportunity will be small. The Arena will be staging a Bon Jovi concert in June which, in effect, only allows a couple of weeks to complete all the renovations required.

Work planned include fraise mowing the pitch, top dressing with 50 tonnes of fresh rootzone material and then sowing a mixture of Barenbrug Bar 7 using several methods of seed drilling and sowing techniques.

According to Michael the early success of the pitch can be attributed to three key factors - using quality products and services, working closely with the manufactures and service providers, and keeping the Arena's management and SIS informed of how the pitch is performing. "If I can justify what I am doing the club will support my needs," said Michael.

Some examples of this can be seen with Fleet and Dennis who have worked with Michael and his team to improve the service delivery of their products.

Fleet have provided a Kombi linemarker, modified to produce an even better line with the introduction of additional paddles at the side of the spray jet. Michael has been impressed with the Kombi and the back up from Fleet. 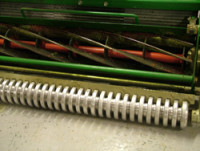 The same goes for Ian Howard at Dennis, with a few refinements to his mowers. Grass collection boxes have been modified for better collection, and the roller on the front of the machine has been redesigned to incorporate more bushes and reduced surface area to minimise grass flattening prior to mowing. Dennis have also changed the gearing on the motor drive, so that the mower covers the ground more slowly continues to offer a higher output of blade rotation speed to increase the cuts per inch of ground covered. Additionally, the blades have been relief ground to improve the cutting quality.

The Arena sward has suffered some minor disease outbreaks in the form of fusarium, however this was successfully controlled by the use of Daconil and Heritage fungicide treatments. Michael is keen to reduce the use of fungicides once he has managed to increase a healthy balance of bacteria populations in his soil profile.

Michael is confident that once he has established and can maintain an optimal rooting depth of 125mm the job of managing and maintaining a quality playing surface at the Arena stadium will be made easier and, in the long term, provide a surface which Coventry City players and fans can be proud of.

There is no substitute for hard work and commitment. Judging from my visit there seemed to be a good working ethos being generated by Michael and his staff. I believe the future of the new Xtra Grass pitch at the Arena stadium is in good hands and will provide a quality pitch for years to come.