0 Plugger aerator and MO Bacter sales growth prior to Windsor 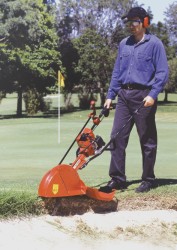 J TURFCARE will use IOG SALTEX to promote a number of successful products - plus some new.

At Windsor last year the company launched a new Plugger aerator (the PL855 Pro HD) which has achieved high sales this year.

"SALTEX is very important for us," says managing director David Jenkins. "It is an opportunity to showcase the best of our products, both new and established. Sales of our Plugger aerator rose significantly following last year's show."

The organic lawn fertiliser eliminates moss without raking and has proved an outstanding success since winning the Turf Pro Product of the Year in 2008. It has recently featured on the BBC's Beechgrove Garden series in a highly successful trial.

"We are delighted at the success of this remarkable lawncare product," says David

NEW PRODUCTS from DJ Turfcare at Windsor this year include Active Lawn Weedkiller which provides fast effective control of a wide range of broad leaved weeds in lawns, including daisy, creeping buttercup, plantain and white clover. It is formulated for easy use with clear instructions for gardeners and can be applied with a watering can.

wo lawn seed mixtures have also been added to their lawncare stable - one for fine turf and one for amenity turf.

ON THE STAND AT WINDSOR THIS YEAR

The PLUGGER PL855 Pro HD. This aeration machine features hydrostatic-drive and uses both solid and hollow tines. It is highly manoeuvrable and is ideal for superior grass maintenance in more difficult areas, being easy to transport and handle. It is particularly useful for large areas of fine turf, and cricket and bowling clubs have found the Plugger invaluable in reviving compacted squares.

The second-generation ATOM EDGERS, both professional and domestic - with new Mitsubishi engines - will be on show .They are tougher, easier-to-use and have improved controls.

The Professional Edger Pro 580 is aimed at local authorities for kerb use and the Atom 450 Deluxe is designed for gardeners with large areas of lawn to edge.

Also on the DJ TURFCARE stand will be the updated ATOM BUNKER EDGER - now celebrating its sixth year as a leading product for the golf industry from the DJ golf and grounds care range. It has a new Mitsubishi two-stroke engine.

The BUSHRANGER EDGER (seen for the first time at IOG SALTEX two years ago) will also be on show. Aimed primarily at local authorities and those looking after large landscaped areas, the Bushranger Edger is ideal for producing razor sharp edges, especially up close to raised paving because of its drop-down wheel.

The Commonwealth War Graves Commission finds the Bushranger can cope with the demanding conditions found in war cemeteries where immaculate conditions and neat edges are imperative.

Also at SALTEX will be MOSSGO, a powerful microbiocidal liquid which quickly and effectively removes moss from hard surfaces, and acts as a long-term preventative on areas including artificial sports surfaces, pathways, timber and glasshouses.