0 PLUMPTON COLLEGE: WINNERS AT THE SOUTH OF ENGLAND SHOW

Winning smiles were visible at Plumpton College exhibits throughout The South of England show.

Students and staff entered a record number of exhibits at the show and received many prizes and compliments for their efforts. Visitors commented on the wide range of flexible land based courses available, which are often seen as career and life changing.

His Royal Highness, The Earl of Wessex, visited the show, meeting Plumpton College staff and students at the farming arena.

Children's activities, countryside and environment displays and information on the College's land based education and training opportunities drew much interest. 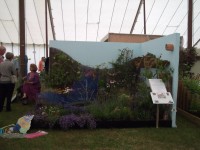 Equine students exhibited the College's heavy horses and proved a winning team. The Netherfield Centre exhibited rare breeds pigs in a first time entry and won 2nd and 3rd prizes. Debbie Hopkins, Head of Centre said, "Congratulations should also go to students Aaron White and Reggie Fellows for showing the pigs on the day. Well done to all who took part."

The Young Craftsman of the Year competition attracted many entries within the jewellery and metal classes from Plumpton College metalsmithing students. Barney Cheeseman from Worthing received first prize and second prize as overall show winner with his creation of a silver flower necklace pendant, with William Sheppard from Burgess Hill winning third prize for an intricate silver and copper brooch.

Garden design students created a design constructed around a butterfly friendly garden, which was awarded second prize in the show. The garden featured specialised planting, sculpture, colour and scents plus elements of beadwork and other design features. The winning horticulture team are now planning last minute touches to their entry for the RHS Hampton Court flower show in July.


For more information about Plumpton College and the courses available at the college visit
www.plumpton.ac.uk
or contact the college by either telephone or e-mail
T: + 44 (0) 1273 890454
E: enquiries@plumpton.ac.uk