Where large percentages of Poa annua exist in mature turf, chemical control of the species is fraught with difficulties. Rapid killing of the weed grass in well-established swards would result in unacceptable loss of ground cover; in many cases, as much as 100%. Such devastation is unlikely to be acceptable, other than in a few exceptional cases.

However, substantial opportunities now exist for its control in younger swards where only small amounts of the weed grass are evident. 'Velocity', a new chemical currently in use in a variety of countries can be highly effective in Poa annua control, particularly in bentgrass fairways. 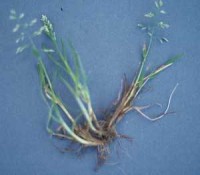 In areas with large populations of Poa annua, a slower, more gradual weakening of the weed grass and subsequent reduction in its percentage would be more desirable. In these situations, biological control would offer a much more satisfactory alternative to sudden death. By gradual weakening of the Poa annua and simultaneous in-growth by desirable grass species, scarring could be kept to an acceptable level. Recent research by Dr Alan Gange, University of London, suggests that biological reduction in Poa annua content is now a real possibility.

These approaches, in combination with a well planned cultural programme, may offer real hope of achieving control of this undesirable weed grass.

Each of these options, along with many other topical subjects, will be considered by renowned researchers, advisors and turf managers at the National Turfgrass Foundation 'In Pursuit of Excellence' Conference at the Hilton Hotel, Blackpool, 5th to 8th December. The findings of recent research will be presented and the potential for Poa annua control will be reviewed and discussed by many experts from both academic and practical backgrounds.

For further information, a Conference brochure, and registration form, simply contact NTFoundation@aol.com or speak to Martyn or Louise on 01995 670675 or 07887578807.