A Buckinghamshire based Head Greenkeeper has successfully increased the percentage of Bent grasses on his greens, by going against accepted practise in the treatment of Poa annua.

Steve Horwood, in charge at Chiltern Forest Golf Club near Aylesbury in the Chiltern Hills, believes that following a flexible programme of fertiliser application, combined with good cultural practise, enables him to produce good playing surfaces throughout the year.

"We are a north facing course a few hundred feet above sea level, and because of that our growing season is restricted to about four months of the year," he says. "We have a combination of soil based, and some sand based greens and trying to get them consistent with each other can be difficult."

After suffering some poor winters after he first arrived at the club in 2001, Steve had to reassess the way he managed the greens going into the winter months.

"Being a cold course we suffered severe Poa die back, and the greens became susceptible to disease at the back end of the year," he explains. "By the start of Spring the greens would lack grass coverage, and we were beginning to receive criticism from our members."

In conjunction with Iain Richardson at Headland Amenity, Steve embarked on a balanced feeding programme throughout the year to maximise the full potential of the greens. Headlands Multigreen Mini 12-0-44, a controlled release potassium based fertiliser, is applied between September - November dependant on the existing soil temperatures at that time. 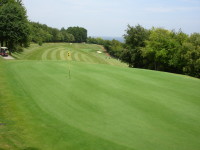 "We have found that the grass plant copes better through the winter months by being healthy," Steve continues. "A low rate application trickle feeds the greens over a 6 month period and is only available should the plant require it."

This, combined with Steve's Spring renovation work, involving the use of a 'Graden' and some drill n fill work, gives the greens a good start approaching the growing season.

A little and often approach to a foliar feeding programme of Headlands soluble and liquid fertilisers ( N sure, Solufeed High K and Seamac Ultra Plus), and Primo Maxx a plant growth regulator, is used throughout the growing season.

"The Primo Maxx holds the Poa back and allows the Bents to out compete it, leading to an increase in green speed that is sustainable," Steve explains.

Hollow coring and overseeding is carried out in August, when soil temperatures can be guaranteed to be at their maximum for Bent seed germination, and is followed by a turf hardener package in September/October.

Steve believes there is a lot of emphasis in green keeping today on trying to eradicate Poa. "This is simply unachievable for the vast majority of us, so work with it," he says. "Give it enough to survive but not enough to flourish. We have 600 members who expect to play golf right through the winter. By choosing to manage the Poa the way we are, we can supply a good playing surface throughout the year. Our Bent/Poa ratio is increasing all the time and we are getting fewer incidences of disease, resulting in less scarring.

Fine turf care is so much a science now and golfers demand that you get it right. By adopting this approach we feel we are getting the best out of our given situation. As a Head Greenkeeper you have got to make your own decisions based on visible results."