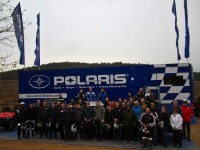 Hyères is the oldest resort on the French Riviera and it was this year's choice for the 2012 Polaris Dealer Conference. Four kilometres from the sea, the old town is built on a mount around the Castle of Saint Bernard with a view to pine-covered hill of Costebelle.

As part of the Polaris EMEA Dealer Meeting there was a high percentage turnout of the UK Polaris dealers. The dealers had the opportunity to ride out on 80 new machines around the surrounding hills with spectacular views.

The conference presentation showed Polaris' Off Road Vehicle sales up 9% with revenue up 12% and the Polaris Ranger accounting for over 50% of sales. The 2012 ORV line-up was revealed, together with a more structured reward program for the dealers. It was announced that the partnership with the NFU continues and the international overview included the Polaris acquisition of Goupil, part of the corporation's expansion in electric utility vehicles. To round off the conference, the dealer awards were presented as shown here.