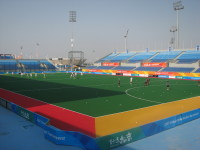 The organising committee of the 2008 Beijing Olympic Games (BOCOG) has recently selected Poligras Olympia 2008 from Sports Technology International as the synthetic turf to be used at all of the Hockey venues for the 2008 Olympic Games.

The POLIGRAS turf will be laid at the two competition pitches at the main Olympic Hockey Stadium and the three training pitches at the Olympic Training Venue, the former venue of the 1990 Asian Games and has recently had a seal of approval from players hoping to play at the games in twelve months.

The 'Good Luck Beijing 2007 Invitational Hockey Tournament' organised by the Chinese Hockey Association and the Beijing Municipal People's Government started at the National Olympic Hockey Centre marking the one year anniversary until the Beijing Olympics. 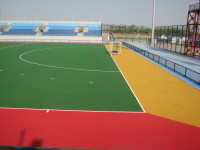 Song Yi, Captain of the Chinese men's hockey team commented: "This is the best hockey pitch in China, it is truly top quality!" Other endorsements shortly followed from Yang Chao, Chinese Hockey Association official and Liam De Young of the Australian Hockeyroos who both commented: "The players and coaches are all extremely satisfied with the quality of this hockey pitch. The pitch is truly world class and fast… which we certainly don't mind!"