by Jane Carley
in Equestrian and Synthetics
on 26 Oct 2013

0 Polo for all seasons! 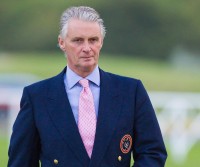 Developments to sustain the future of polo is how Dr Dallas Burston describes the ambitious project taking shape at his eponymous Warwickshire polo club.

Already a staggeringly impressive polo facility with six pitches, a Colonial-style Clubhouse Pavilion currently being extended to house a larger restaurant, a marble-clad purpose built structure for weddings and functions and facilities for horses and humans from resident and visiting polo teams, there is more to come this year.

In the final stages of construction is the new DBPC SuperArena®, Dr Burston's own concept to extend the previously seasonal game of polo to a year-round sport suitable for a wider cross section of players.

"At the end of the season, patrons and professionals just want to keep on playing. Previously, they have played arena polo on an enclosed all-weather surface, but the size restrictions of the arena meant that the game went from the traditional four-aside to three-aside. SuperArena Polo®, is for the full team of four players, but retains the larger, soft polo ball from arena polo, whilst the slightly slower pace means that it is safer and thus more accessible to less experienced riders and a wider variety of horses."

Designed by Dr Burston and built from the ground up by all-weather equestrian arena specialist Martin Collins Enterprises, the 2.4 acre DBPC SuperArena® is surfaced with Ecotrack, which can be prepared for a range of other equestrian sports in addition to polo.

"The surface can be fluffed up with a harrow or rolled firm, so it can be used for showjumping and can also accommodate four dressage arenas side by side. In August, it will host more than ninety mounted games teams for the MGA's (Mounted Games Association) national championships. We have also had enquiries to play rugby and cricket on the arena, and I believe it would make a first class beach volleyball venue."

Alongside the main arena, there is a 30m x 40m collecting ring, whilst dedicated road access to the rear keeps horses and vehicles separate from spectators; new stabling for 200 horses is also planned. On the long side, a new thatched building will accommodate a competitors bar and changing rooms.

"We have planning for a 200 bed hotel which will be built when the economy picks up," explains Dr Burston, "but, in the meantime, we are looking at developing a campsite with two-bedroom yurts which would provide accommodation for competitors and spectators alike."

A panoramic view of the arena is afforded by the wide balcony of the new conference centre, which will also provide VIP hospitality for its events.

Again the brainchild of Dr Burston, the conference centre has a total capacity of 3,600, with the ability to seat 1,000 for dinner, a full size cinema screen and bar and restaurant facilities. It can also be easily split into sections to allow several separate functions to take place at once.

The entire club, on a former dairy farm at Southam, has come a long way from its inception in 2000. Dr Burston initially built three pitches, followed by the glamourous Clubhouse Pavilion, and set about forming links with the local community to encourage businesses and families to discover polo - admission is free to many fixtures and picnicking and corporate parties are warmly welcomed.

The facilities were rented out to an Argentine player from 2005-10, but have expanded rapidly since, with six pitches now available for tournaments and stick and ball (practice), plus an exercise track, stabling and turnout paddocks for teams who base their operation at the club for the season.

"The amount of pitches and our ability to rotate them means that we can always offer superb playing conditions," explains General Manager, Major Richard Carney. "We are usually able to accept bookings when other polo clubs are out of action, and with the DBPC SuperArena® we can provide a year-round opportunity to play polo."

Major Carney adds that there are fixtures every weekend from May to September, plus chukkas (practice matches) every Tuesday and Thursday, and players may book private practice sessions at other times.

The task of preparing the pitches falls to Estate Manager John Kennedy, Polo Director Ginger Hunt and a full time contractor, all under the watchful eye of Major Carney.

John looks after the entire site, which includes extensive hospitality lawns, manicured verges and parkland, as well as 250 acres of woodland.

His family farmed the adjacent land, and John runs a local engineering firm, so his local and specialist knowledge has proved vital since he first joined the team, initially on a part time basis, twelve years ago.

"Some of the land was arable and some grass, and the pitches were simply created by ploughing, power harrowing and levelling before seeding," he explains. "Three of the pitches are on limestone brash, whilst the two newest are on clay with a patch of limestone close to the surface at one end. We have unusual climatic conditions - rain seems to circle around us, so they are often very dry."

Post season renovations are key to preparing the pitches and providing good conditions for the following year, he explains, with a Charterhouse slitter used to decompact the surface and encourage root growth and tillering. "I find that rotary decompactors can bring up stones on this ground, so a slitter gives the required aeration, and I will use it as many times as possible before the weather closes in." Sheep are used to graze the sward over the winter, keeping it short when weather conditions prevent mowing.

The pitches are also overseeded in the winter, if necessary, although John points out that the rotation of the pitches means that there are no areas of especially heavy wear, whilst sanding also helps in wet conditions. A slow growing ryegrass mix is used, formulated to withstand close mowing.

"Pitches are mown twice a week to 20mm," John comments. "This is the height specified by the Polo Director, but is does mean that the sward struggles with recovery in dry conditions on the clay soils."

To cover the extensive areas of grass - surrounds and lawns are ideally also cut twice a week - Major 5m rollermowers and tri-decks are used for routine cutting, with Toro 4000D and Baroness cylinder mowers for tournament preparation.

"All mowing was done with cylinders before I took up a full time role here," comments John. "They do offer a slightly more even cut, especially with the floating heads on the Toro, but are vulnerable to damage from foreign objects such as horse shoes, whilst the sand quickly blunts the blades." 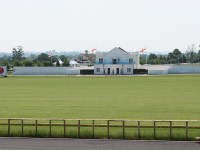 "The Major mowers are extremely robust and reliable, coping with the workload well, but when we get behind with the cutting, due to wet conditions, I would ideally like better distribution of clippings."

The rollers on the rear of the mower are sometimes used to stripe up pitches between matches and do a good job of improving presentation without using heavy rollers. Tractors are also shod on grassland tyres to avoid compaction.

"These pitches had the reputation for being hard, which is not popular with the players," comments Major Carney. "But John's maintenance regime has improved playing conditions considerably, and patrons who had not played here for eight years are returning. We had a 10-goal player here to practice last night and he was very complimentary about the pitch. Post-season renovation is crucial."

Thatch has not proved a particular problem, although John uses a harrow from time to time to remove worm casts.

John comments that the pitches stand up well to the rigours of tournaments and need little renovation in between; sand and seed divot mix is occasionally used and Ginger Hunt will give the pitches a cut.

"The surfaces never cut up badly, even with fast play and the downpours we have had this season," comments Major Carney.

Arena boards are set at the beginning of the season by the grounds team once Ginger has placed the pins to ensure that the lines are straight. The boards are repainted and refurbished before being stored under cover in the winter, and the grounds compound facilities include workshops where John takes care of maintenance.

Another new project on the horizon is an irrigation system to maintain good playing conditions in drought periods.

"We already have the water pipes in place and we are testing water extraction. We will need to build a reservoir and I'd like a boom application system, but it needs careful planning to avoid watering becoming a time-consuming operation," comments John.

Dallas Burston Polo Club is a stunning venue offering great sport and entertainment for both the local community and fans of equestrian sport from across the country, but perhaps their greatest asset is the dedicated professionals, caring for its vast area of turf and looking ahead to an exciting future.