2 Ponies to Penalties for Minchinhampton RFC 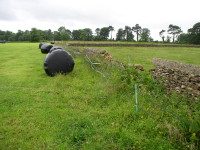 Minchinhampton RFC has recently hosted its first league game in its new home - 3.8 hectares of Cotswold brash which has been transformed from farmer's field to first class facility in just twelve months by sportsturf contractor Ecosol Turfcare

Back in 2009, ponies grazed the wispy grass of Crackstone Mill Ground in Minchinhampton, Gloucestershire, just a drystone wall or two away from the Gatcombe Estate of Anne, The Princess Royal. Today, its smooth immaculate turf constitutes four rugby pitches belonging to Minchinhampton Rugby Club. The development will be completed with a purpose built clubhouse overlooking the prime pitches when fundraising is complete.

Until now, Minchinhampton had been a "nomadic" club, without their own ground. Established in 1982, the seniors used some land next to a house which was eventually sold to non-rugby-friendly occupants and the juniors had to use local schools. Their problems were often quite unique: "We frequently played on Minchinhampton Common," said former chairman, Morgwn Atkins. "It would take the first twenty minutes of each session putting up the posts, and the second twenty clearing up cow pats!" For ten years, it was a constant worry finding venues for eight age groups, falling victim to varying standards of pitch care and school sports fixtures, not to mention unco-operative cows! "It was not uncommon for our 'home' game to be in Cheltenham, fourteen miles away," he added. 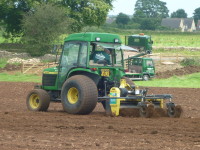 For the whole of that period, the club had been looking for a site, whilst raising money and, eventually, they managed to purchase the land at Crackstone Mill for £174,000 and secure a grant from the Rugby Football Union (RFU) to construct the pitches.

"It's been an utterly painful and brain-numbing journey from finding and buying the land, getting planning and change of use and dealing with various authorities, but the pitch construction side has been absolutely perfect," said Morgwn.

That construction was carried out by sportsturf contractor, Ecosol Turfcare, who won the tender which had been put out by the RFU and their appointed consultant engineer, PSD Agronomy's John Hacker. "The RFU made the final decision on the contractor appointment, but we were happy as we knew the company had a good reputation, they were locally-based from Malmesbury, and had submitted a very thorough and comprehensive tender." 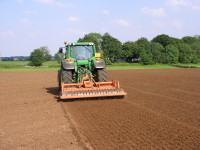 Ecosol Turfcare had initially been asked to inspect the site and assess its suitability for conversion before the club had even entered into purchase negotiations. "We advised that it would be possible, and that it would probably need a 'cut and fill' due to some of the more significant slopes present on the grassland," said the company's MD, Bretton King. "Then, due to it being in an Area of Outstanding Natural Beauty, the planning permission placed restrictions on the type of work that could be done and that included a ban on cut and fill! So, when PSD invited tenders, we were faced with a different specification and challenge."

Once the ponies had been removed, a local farmer mowed the overgrown pasture and made round bale silage to clear it. This enabled the Ecosol team to move in to apply glyphosate on 5 July 2012 and progress, seven days later, by ploughing it, discing and power harrowing. This revealed that the brashy soil was as shallow as 150mm in places, causing plough shares to bounce along the bedrock!

"We knew it required an awful lot of work to transform it from fields to top class pitches," said Tony Dowie, Minchinhampton grounds manager, "but we were confident in the contractors ability to bring it about." 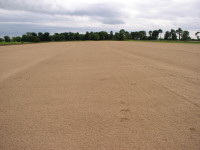 The foundations for the clubhouse were excavated and the 300 tonnes of resulting topsoil were spread on the lowest part of the area (designated for pitch number 2) to partly counteract the inability to do cut and fill operations.

Following an initial grading, manual stone removal took place (some as big as headstones!) which netted over twelve tonnes of beautiful drystone walling material. The whole site was then graded more finely to remove the old hedge line and surface undulations so that the 1st XV and 2nd XV pitches had longitudinal falls of 1:110 and 1:83 respectively with transverse falls of 1:46 and 1:42.

Once completed, the painstakingly slow BLECavator stone burier was then deployed to bury all stone greater than 25mm in size. Nevertheless, it worked well despite the volume of rock, as the material was successfully buried 150mm below the surface. 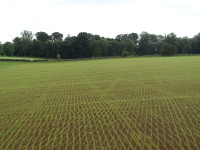 The next stage of the construction saw 1800 tonnes of medium fine sand shipped in and applied to the higher specification 1st and 2nd XV pitches, leaving a 50mm layer of sand on the surface of the pitch areas. This was incorporated with the top 50mm of topsoil, using a power harrow to form an imperfect mixture and then a final tilth prepared with a lightweight drag harrow.

Despite the wettest summer for many years and all its interruptions to work, barely seven weeks from the start of the operation on 24 August 2012, the entire area was given a 400kg/ha NPK application of 10:15:10 pre-seed fertiliser and then seeded at 40g/m² with Barenbrug Bar 7, a pure ryegrass blend of four cultivars.

Manual stone picking followed this; the surface was firmed with a light roll, then left alone to establish for a month before the first mowing as the grass reached 60mm height. Four further autumn cuts were managed, as well as a winter 4:12:12 feed being given in October 2012. 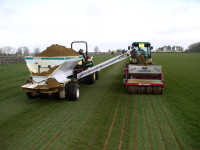 "It was an extraordinarily mean winter with record rainfall, persistent wind and a late cold spring, meaning that grass did not start growing very early. But it drained well, allowing us to fertilise at 12:6:6 in late March and get on with the Blec Vibra Sandmaster a month later," explained Bretton. The Sandmaster added 15mm wide x 150mm deep sand bands to connect the surface to the free-draining bedrock beneath, with the four day operation providing further improved drainage properties. An overseeding at 15gm/m² rounded off this phase before the next operation of vertidraining (25mm tines at 100mm centre spacing) and applying 700 tonnes of Sportsturf topdressing sand, which took place in early June 2013. A light weed control was needed mid-summer due to low populations of Ribwort, Plantain and Chickweed which weren't really being controlled by the mowing regime

Finally, almost a year after starting, Ecosol was able to mark out the four pitches and erected 13m aluminium goalposts from Mark Harrod Ltd, hinged because the strict planning consent requires the club to be able to take them down from time to time.

On June 30th this year, John Hacker convened the handover meeting and duly signed off the pitches for the RFU. The contractor will continue to mow, whiteline and provide day to day groundscare duties until the end of 2014 as part of a separate aftercare contract, something widely regarded as essential nowadays if investments are to bring about long-term successes.

"Ecosol have been pretty brilliant to work with," recalled Morgwn Atkins. "The quality of the work speaks for itself, but also, they have been excellent communicators, keeping us up to speed every step of the way, even sending photos of the work and erecting signs to keep the public informed and the site safe and secure. They have acted over and above the call of duty."

Having the new ground has been excellent for the club's morale. The club's committee were ecstatic when they bought the land, hit a trough and anti-climax whilst struggling to get the various permissions, but then shot back onto a high when everyone saw the construction kicking off. The new ground has raised the club's profile, brought everyone together and made it easy to retain senior players. 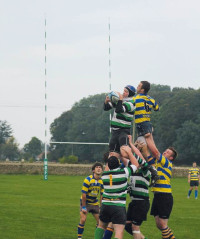 "It's breathtaking having our own home after so long; we are really chuffed," added Morgwn. "Everyone is chipping in, from donations for the new clubhouse to offering help, such as drystone walling. Members and parents love it, we are in charge of our own standards of pitch care and maintenance, we don't have the year on year worry of which venues we'll be using and we feel like a really secure club."

Minchinhampton have erected two portable buildings until funds allow the clubhouse work to proceed, but the pitches themselves are now well established and being used by the seniors and a blossoming junior section.

"It's a truly amazing transformation," said Tony Dowie. "The pitches coped brilliantly with such a dry summer. I can personally vouch for the fact that they are great to play on and everyone is saying how good they look."

The club's first league game took place against Cainscross on 28th September, supported by over 200 spectators. A "ribbon-cutting ceremony" and barbecue heralded the next chapter in the progress of Minchinhampton RFC.