by Lee Williams
in Equestrian and People
on 26 Jul 2019

Lee Williams headed over the Pennines to meet Pontefract Racecourse's Head Groundsman Martin Follows; a man whose career began as a car mechanic and tyre fitter before going 'flat out' into the equestrian world. 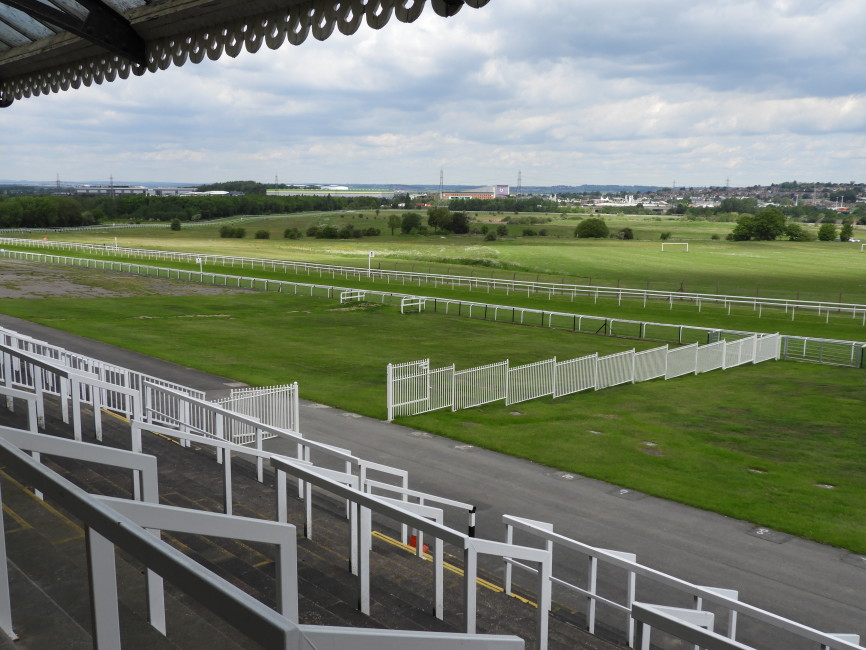 Racing is recorded as having taken place in Pontefract as early as 1648, when the forces of Oliver Cromwell were besieging the castle. Races were held in the meadows near the town, but these were discontinued by 1769. The townsfolk restarted the sport in 1801, and it has continued ever since. In 1827, the races were held in September and reported as being very fashionably attended.

In 1802, Pontefract pioneered the sale of what, more or less, amounted to a lifetime membership to the course with admission to all races to members in possession of a '20-year badge'. This scheme funded the racecourse's first grandstand.

All races at Pontefract used to start at 2.45pm, so that miners at the adjacent collieries could finish the morning shift in time to go racing. This remained the case until the collieries started to close, but is a good indicator of the social attitude Pontefract Racecourse displays towards its patrons.

Whilst it cannot claim to be one of Yorkshire's principal courses, it was used for some major races during World War II when other courses were out of action; these included the war substitute Lincoln and November Handicaps.

Pontefract installed a photo finish in 1952 and was also the first English course to have a dope testing facility.

Pontefract is the longest continuous horse racing circuit in Europe at 2 miles 136 yards (3,333 m; 16.57 furlongs) and is situated just off the M62 next to the historic market town of Pontefract in West Yorkshire. On a warm, sunny day in May, Lee Williams met up with long-serving staff member and Head Groundsman Martin Follows. 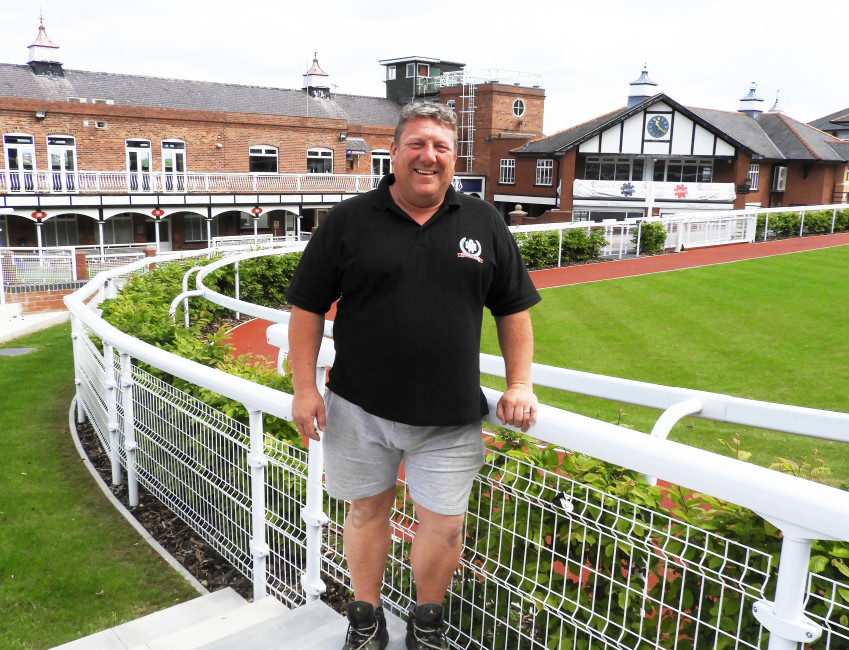 Martin first tells me how he ended up working at Pontefract Racecourse. "Funnily enough, I started as a car mechanic when I left school in 1986. I did that for twelve months before going into tyre fitting. I first started at the racecourse on the 21st May 1990; I got the job through working for a contracting firm putting up the plastic rail around the track one winter. Whilst carrying out this work, I asked if there were any positions available and, fortunately for me, there was a young junior groundsman position available. So, from asking the question on a Friday, I started the new post on the following Monday!"

Over time, Martin has worked his way up through the ranks to become Head Groundsman. "In 2015, I took over the role from Richard Pemberton who retired after ten years in charge and, before him, it was Ronnie Senior who served the racecourse for fifty-eight years."

Martin's education over the years includes a Foundation course he took at York Racecourse in 1997, then in 2002 he did his NVQ Level 2 sports turf at Newmarket and, three years ago, completed his NVQ Level 3 in sports turf management, again in York.

I asked Martin if there was any one person who had inspired him along the way. "Ronnie Senior, my former boss," he says, without hesitation. "What that man didn't know about this place wasn't worth knowing. Many a time he would tell me to dig an area where he believed there was a drain, and I would think, no there isn't. But then I'd would have to eat my words as there it was." 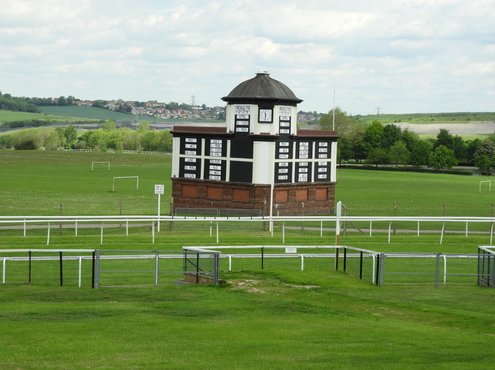 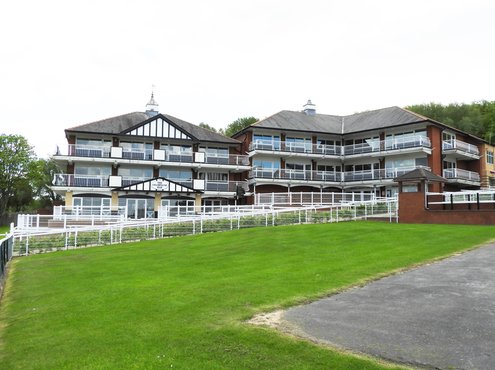 Martin has five members of staff who help him not only to maintain the track, lawns, fences and gardens, but also the maintenance of the buildings inside and out. Rob Pemberton, twenty-five years' service; Craig Townend, twelve years; Andrew Van der Wal, eight years; and Derek Townend, who is, unfortunately, on long term sick leave, so they took on Mick Appleyard last year.

Martin uses agronomist Lawrence Hayes for testing on the track. "He puts the reports together and sends them to myself and my gaffer Mr. Gundill and, from there, we work out what fertilisers and sand needs to go on, which helps us to determine the budgets for the coming season."

Martin does not use any outside contractors to renovate the track as what they require is very limited, so this is all done in-house, which mainly involves deep aeration using their own verti-drain and SISIS spiker. Contractor Peter Linley does all of their spraying for them on the track and around the course.

Martin explains that the track's soil profile is varied. "Where to start with this track? It's clay in parts, sandy soil in others and limestone down the mile straight, with about nine inches of soil on top. It can be challenging at times when it's raining; it's a funny old track is this. We have put umpteen sand slits and French drains in the past, alongside some polypipe ones, but mainly we like to use French drains as we find them more effective on this site. Over the last few years, we have taken the tops off and redressed them with sand to keep everything nice and clean." 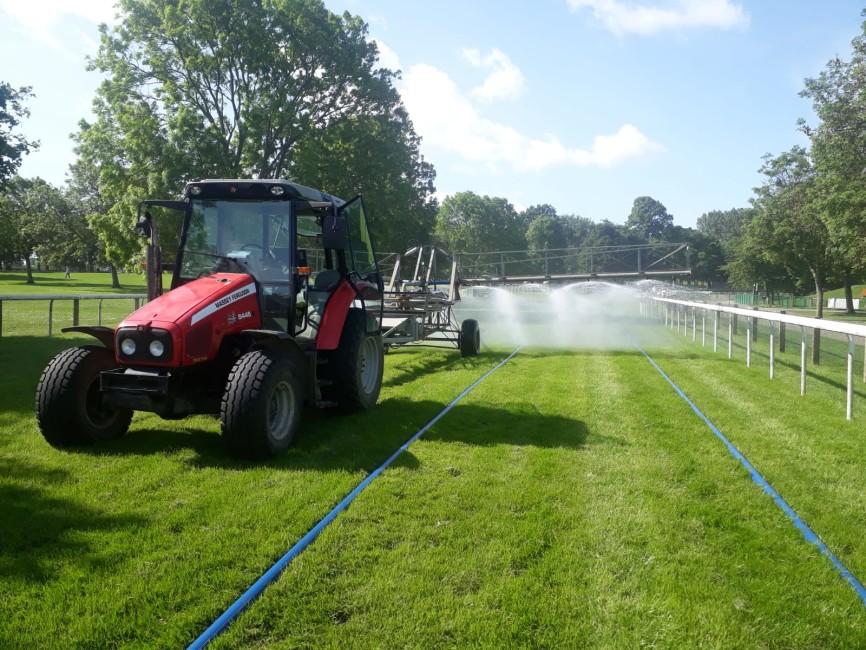 Martin talks me through the issues he has had with the irrigation system. "We have an Upton boom system irrigator that's not a bad piece of kit. It used to be motorised and run off a computer but, like much hi-tech stuff, it didn't last very long, so we had it all taken away. It was sensor driven and used to be in charge of you anyway! We've now had a drawbar put on, so we just tow it around with the tractor. We have just a pump house, with nine hydrants about two furlongs apart around the course, and we take our water from part groundwater and part borehole."

When maintaining the racecourse, Martin and his staff have got to be aware of their surroundings as the course is open to the public during non-race days. "We have dogs chasing us whilst we are on the tractors but, other than that, the public are generally not too bad, especially if we ask them not to walk on the track. It's just a matter of being polite, being aware of our surroundings and working with them, not against them."

Maintenance procedures on the course vary significantly from the winter months to the summer months. "Mr Gundill and I will put a list together before the start of the year and, between us, work out what needs to be done and, from there, prioritise each job with a number."

"In the last few winters, it has been quite mad as we have altered all of the parade ring. We have dropped it at the far end by 1.5m - it used to be more on a slope, and the contractors built the new wall up surrounding it. We have renewed the horse walk and put all new safety barriers up. All the rings have been altered. We used to have the Premier Club, Silver Stand and Picnic Ring, but we have done away with the Silver Stand, whilst the Premier has been made bigger by twenty yards, and we now have upper and lower tatts for the paddock and Picnic Ring." 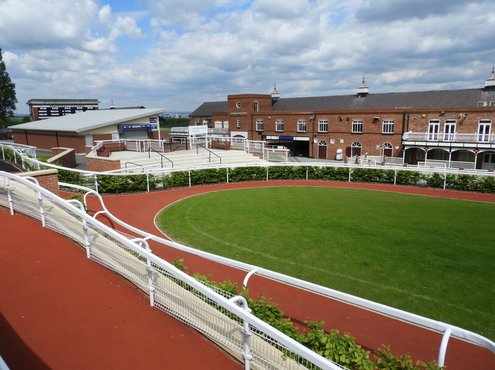 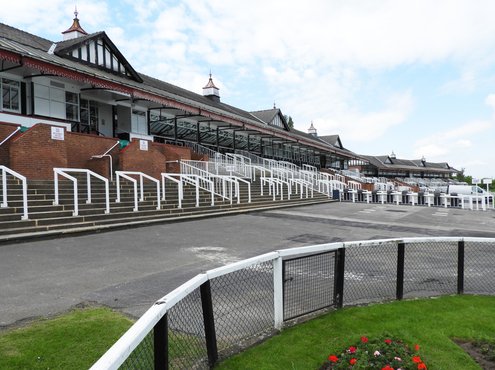 "Through winter, we will decorate and help with any maintenance around the buildings, and I will help with the organisation of any contractors. In summer, it's seven months of a regime in a sense. Race days will come up, so we have to start getting the track ready and get it cut with the Pegasus S3 rotary mower (at a height of five inches) and cut the lawns and parade ring with a Ransomes cylinder mower which stripes them up nicely."

"We make sure all the stables are cleaned out and fogged. On race day, everybody makes a mess so, the day after, we have a group of lads come in to help us clean up the litter and stables etc. Once that's done, we will get the track put back together, treading it in, then go around with a sand/seed mix and fill any large divots. After that, it's getting ready again for the next fixture."

Martin likes to carry out a regular aeration programme throughout the year. "We aerate with the SISIS spiker a few times a month, depending on the weather. I like to verti-drain in May because we have a dolly rail, which we put up for two and half months. I generally I like to get that dollied off and verti-drained, but with the weather being like it has, it's not been ideal for that, so we just spiked it this time. Come the end of the year, it will get verti-drained all the way around at depths varying from six to eight inches." 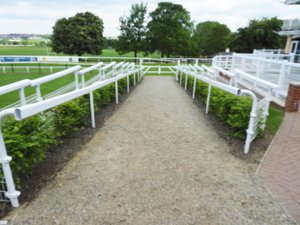 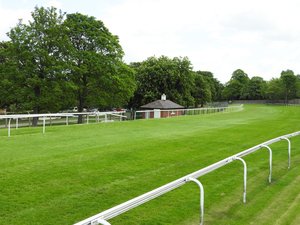 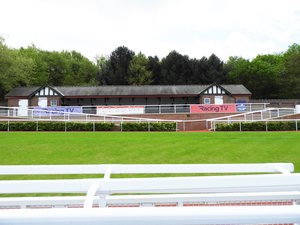 The racecourse likes to purchase their machinery outright and, in recent years, Martin has been able to add some new pieces of kit to the old. "In the last two years, we have bought two new larger tractors as the ones we used to have were too small and getting past their sell-by date, bless them. Only recently, I asked for a 6ft topper rotary mower for areas of the track that are a bit too wide for the mower."

Martin hasn't been given any special projects yet for this winter, but he does have one of his own. "I'm in the dark about what we are going to be doing this winter, but I have my own little project in mind - I would like to refurbish the stable yard. When we altered the parade ring, we took out a lot of rubber blocks and I want to use them to make an entrance way into the stables because, at present, it is just limestone. So, if I can get that done, it will look a lot better, plus it will make it a bit quieter for the horses walking in."

With the course being next to woodland and a vast expanse of playing fields in the middle of the racecourse, Martin suffers damage from moles and squirrels. "We have problems with them at the minute, so we have a chap who comes in and traps the moles for us in and around the track, but the squirrel culling is down to the local council."