Australia skipper Ricky Ponting has hit out at the flat wicket at the WACA after South Africa successfully chased down a target of 414 to win the second Test by six wickets.

The Perth ground has held a certain notoriety for its tendency to serve up fast, bouncy pitches in the past, but South Africa completed the second highest run-chase in Test history on Sunday with surprising ease as the wicket proved incredibly flat. 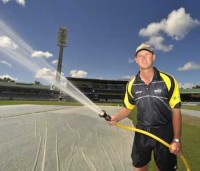 The featherbed served up for this contest by WACA curator Cameron Sutherland followed a recent trend, which has now seen Australia record one win, one draw and two losses from their last four match in Perth, and Ponting feels that the pitch is losing its aura.

"I'm disappointed in the result and I'm disappointed because the uniqueness of the WACA that it once had, that we keep hearing about every year, it appears it's always there for the state games but it's just not there for Test matches, which I think is disappointing," Ponting said following a defeat which leaves his side one-down with two to play.

"The beauty with playing cricket in Australia is that you get a vast array of conditions all around Australia and I've just got a bit of a feeling at the moment that this place has just lost whatever it had as far as its uniqueness. "This Test match here has basically been played on a wicket like Adelaide. It's not a WACA wicket whatsoever."

Ponting stopped just short of suggesting the groundsmen are purposely preparing batter-friendly pitches to increase the chance of the game going all five days - thus maximising TV and gate revenues.

"Brisbane and Perth are the places that offer a bit of uniqueness in Australia.

"I think Brisbane still has that and I think the WACA is losing that very quickly."