0 Pontypridd football volunteer acted as coach, groundsman and fundraiser to save his local club

Andy Jones, of Ton and Gelli Boys and Girls Football Club, Rhondda, is up for Volunteer of the Year in 2014 Community Football Awards by McDonald's.

A Pontypridd football volunteer who has acted as coach, secretary, groundsman and fundraiser to secure a local club's future is up for a national award. 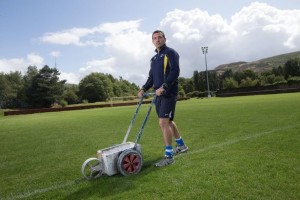 Andy Jones, from Pontypridd, was voted a regional winner for South Wales in the 2014 Community Football Awards, and is now in with a chance of winning a national accolade, presented by McDonald's.

He is counting on local votes to win The People's Award, with voting now open for the six regional Wales across Wales in the Volunteer of the Year category - a special award for an extraordinary grassroots football hero.

The successful nominee will be announced at a ceremony on Monday, October 13, at Cardiff City Stadium ahead of Wales' Euro 2016 qualifier against Cyprus.

Andy has been a stalwart at Ton and Gelli Boys and Girls Football Club, based in the Rhondda, for a number of years and was a shining light in their darkest moment.

He was the driving force behind rejuvenating the club when they looked like folding after the senior committee all retired - trying his hand at a number of roles including secretary and coach.