by Delme Parfitt
in Rugby and Synthetics
on 01 Apr 2016 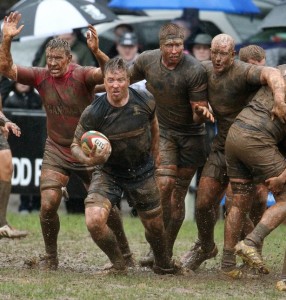 Pontypridd's iconic Sardis Road pitch could become artificial within the next two seasons, if the club's hierarchy rubber-stamps the proposed switch.

The Welsh Premiership club are considering turning to a 4G surface at their House of Pain home after years of battling to keep the grass pitch in good condition.

Ponty's 6-5 Swalec Cup win against Merthyr on Saturday will have concentrated the minds of those on the club's board.

The game was played in appalling conditions, with surface water lying on a pitch that became a quagmire by the final whistle.

By the end, some players were completely caked in mud, their kit unrecognisable.

Pontypridd are understood to be weighing up the cost of installing a 4G pitch against what revenue they could potentially recoup from hiring it out for community use.

The move would mirror that taken by Cardiff Blues two seasons ago, with an artificial surface having been put down at the Arms Park.

It has largely been a success for the capital city outfit who endured problems with a heavy grass field prone to waterlogging for many seasons.

The Blues have also reaped the benefits of income received from pitch hire.

Ponty following suit would be resisted by traditionalists and those who see the grass as part of the uniquely challenging environment which greets opposition sides at Sardis Road.