3 Poor water spells 'no worries' down under

Drought orders may be a receding memory in the U.K. and Europe, but for turf managers in Australia's New South Wales they are an ever- present problem. Steve Scollard, racecourse manager at Gosford Race Club, one hour north of Sydney has his own alternative water supply, but the quality is such that it takes vigilant turf care and frequent soil monitoring if his grass is to thrive.

"Down here we're on level four restrictions which means we can't use any water on the course that comes out of a tap," he explains. "We're not allowed to use tap water for anything other than domestic use - you can't even clean your car." Four years ago Steve installed a central collection system to conserve rainwater. "We've got a dam in the centre of the track with a capacity of 20 million litres," he continues.

"All the run off from the track, the grandstands and the car parks runs into a pipe system and is then pumped into the dam. This year all our rain seems to have come in one hit. We'd had no rain for months but during the second weekend in June we had 388 mm in 30 hours and two thirds of the track was under water." Consistent high temperatures, (often in the mid to high 30s) lead to high evaporation and once the water in the dam drops beneath a certain level Steve tops it up with water from his bore hole.

"The quality of the bore water is very, very poor," he says. "We used it originally to irrigate the sand track, but we've since changed this to a synthetic track that doesn't need water. I've had the bore water tested on numerous occasions and know that it's high in sodium, high in iron and high in chloride. As soon as I knew we wouldn't have enough rainfall to meet our needs I was concerned about the possible damage using this water would cause."

Steve attended a lecture in August 2004 at St. Johns Park Bowling Club in Sydney, given by Floratine international and subsequently had his soil tested and analysed. Simon Cooper of Turf Care NSW, Floratine's distributors in the region says that the results showed a very high sodium content. "We recommended Calphlex and the soil penetrant Pervade to flush the excess sodium from the soil and foliar feeding with Per4max, to encourage density and rooting and Knife a fortified iron nutrient.

Trical and Turgor were included for plant strength and recovery, along with Maxiplex to promote nutrient and moisture availability," Simon recalls. "Steve tested our recommendations on his two hectare training track before employing them throughout the course. He now limits the use of his original granular fertiliser to once a year in early spring."

"I get good results using foliar feed," Steve confirms "and I find Turgor particularly useful. We race here all year, holding 22 race meetings with trials once a month. On top of that we have between 120 and 150 horses in training and we open our grass tracks three times a week. This means that the turf (we use warm season kikuyu grass, which thrives in Australia) gets quite a pounding. It needs to be strong in the first place and able to recover quickly. I've increased my applications of Turgor from bi-monthly to monthly." 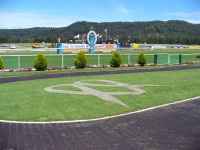 Whereas Steve used to have his soil analysed once a year, this now takes place every three to four months. "The last soil analysis showed a high nitrogen content, and since then Steve has been using Protesyn," Simon continues. "Protesyn helps the conversion of nitrogen in mature protieins and Steve's been getting good results with it."

"The track looks good and races well," Steve confirms. "It's proven itself in both extremely dry and wet conditions. We got through the summer before last, which was pretty much the driest summer I can remember for the last 20 years, and we've got through the last one. With our water restrictions we're obliged to use alternative supplies, which are not ideal, but I can now do this and keep the course in first class condition."