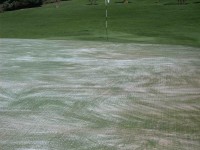 Trialled initially by head greenkeeper, David Horn, in April 2011 at the recommendation of Everris' technical area sales manager, John Noyce, the product - a fine particle (0.5mm - 1mm) granular material with an open-cage structure designed for use as a top dressing and as a soil amendment in new rootzones, has enhanced the porosity of the soil, leading to noticeably faster downward movement of surface water while simultaneously boosting the soil's nutrient-holding capacity.

"The improvements in drainage and nutrient retention were rapid and clear, creating a far better turf-growing environment and a greener, firmer playing surface within days," commented David. "As a bonus, the upgrading of the soil's structure means that moisture is retained for longer in dry weather, helping combat drought and the restrictions now in place on water use. Greenmaster Topdress Z is a very clever product."

Following the impressive results achieved with his first application, David treated the same green again last September and is planning another treatment shortly. 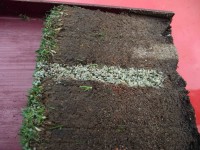 Both previous applications of Greenmaster Topdress Z have followed hollow coring of the affected 11th green, one of four par 3 holes on the 6,295 yard parkland course.

"Although we verti-drain all of our greens regularly, the course has nine older push-up greens dating from 1929, eight of which have benefited from additional treatment in the form of Whizz Wheel trench drainage," explained David. "The remaining green has clay pipes lying too close to the surface for mechanised drainage, leading to the poor water infiltration that has been cured now with help from Everris."

Prior to the first application of Greenmaster Topdress Z, David and his staff hollow-cored the entire 11th green using 12mm diameter tines working to a depth of 150mm. The material was then spread neat across the surface by hand shovel before being luted in and watered lightly to firm and settle the particles within the green.

David points out that there is no hard and fast ideal application rate for Topdress Z, so he elected to apply sufficient to cover the entire green and fill all of the hollow-cored holes.

"We ordered a 500kg bag and used the lot on a green measuring 325 square metres," he recalled. "It was virtually dust-free and I was amazed at the ease of working it in and how quickly it became integrated within the surface. Even more astonishing was the beneficial effect produced within a very short time, achieving my two main objectives of promoting better drainage and providing an improved growing medium, enhancing the soil's nutrient-holding capacity."

In practical terms, says David, the difference means that the green now dries out in less than a day instead of three days or more following periods of heavy rain. The sustained improvement seen in turf growth and appearance is also drawing praise from club members.

"Within a year, the 11th green has gone from being one of the poorest on the course to one of the best," he concluded. "Everris' Greenmaster Topdress Z has done a wonderful job for us and I can recommend it to any golf course looking to improve water infiltration, soil porosity and nutrient retention."