A GROUNDSMAN creates a giant spray of flowers as he puts the finishing touches to a 30ft Remembrance Day poppy. 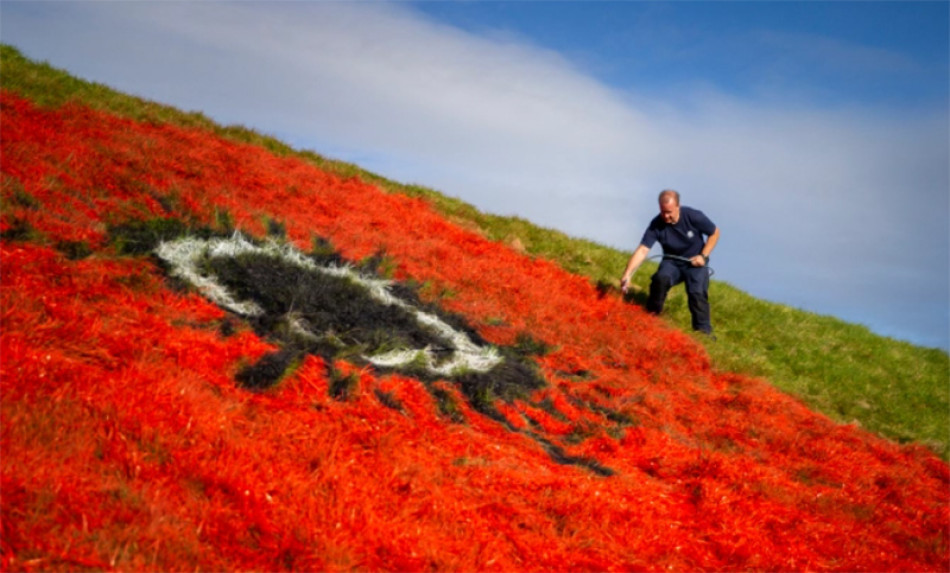 Giant Remembrance Day poppies have been spray painted on hills beside the M8. Credit: Duncan McGlynn

Rugby groundsman Jim Dawson, 49, and staff from paint firm Linemark UK added the finishing touches to the trio of iconic poppies on the pyramids overlooking the M8 near Bathgate in West Lothian.

Mr Dawson, whose day job is head groundsman at Murrayfield for the Scottish Rugby Union (SRU), has helped create the display ahead of Remembrance Sunday each year since 2011.

They are expected to remain on the mounds until after Christmas -- visible to thousands of motorists passing on the main route between Edinburgh and Glasgow.

Each poppy requires more than 40 litres of red paint, ten litres of black paint and five litres of white, which are sprayed onto the grassy pyramids. Each poppy requires more than 55 litres of paint

Fundraising chief Gordon Michie said: "This will be a Poppy Appeal like no other. Thousands of our volunteers are unable to collect as they normally would so the poppies on the pyramids are perhaps even more poignant and important this year than ever before.

"Online donations will be vitally important to us and the Armed Forces community this year, and we hope seeing these stunning poppies next to the M8 will remind the public of the Poppy Appeal's importance, and encourage people to visit our website.

"Our thanks go to the Pyramids Business Park and the wonderful team of ground staff from BT Murrayfield for their continued support."