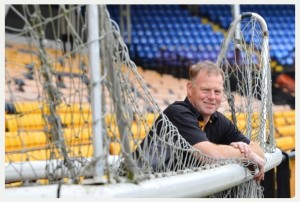 Just to clarify, the footage in question shows the groundsman in a television commercial promoting natural grass pitches.

Sweden's top clubs tend to use artificial pitches but the commercial, by Svenska Spel, is promoting a product called 'English Grass' to improve lawns and playing surfaces.

Who better to star in the advert than 53-year-old Speed, who has been tending to the Vale Park surface since 1979.

Speaking about his role in the commercial, he said: "I think it was an honour when I was asked, considering there were three or four clubs being considered.

"They came and spoke to me and said they'd be happy for it to just be Port Vale, which is obviously good for the club, myself and everyone connected to the club.

He added: "To see how professional they were in the way they filmed the coverage was great.

"It made for a really interesting couple of days. I think one or two of the crew have become Vale fans as well. They went home with some replica shirts which is nice."

Read the full article from the The Sentinel HERE