by Mike Baggaley
in Football and People
on 28 Apr 2019

Port Vale used yesterday's final home game of the season to pay tribute to long-serving head groundsman Steve Speed who is celebrating 40 years at the club. 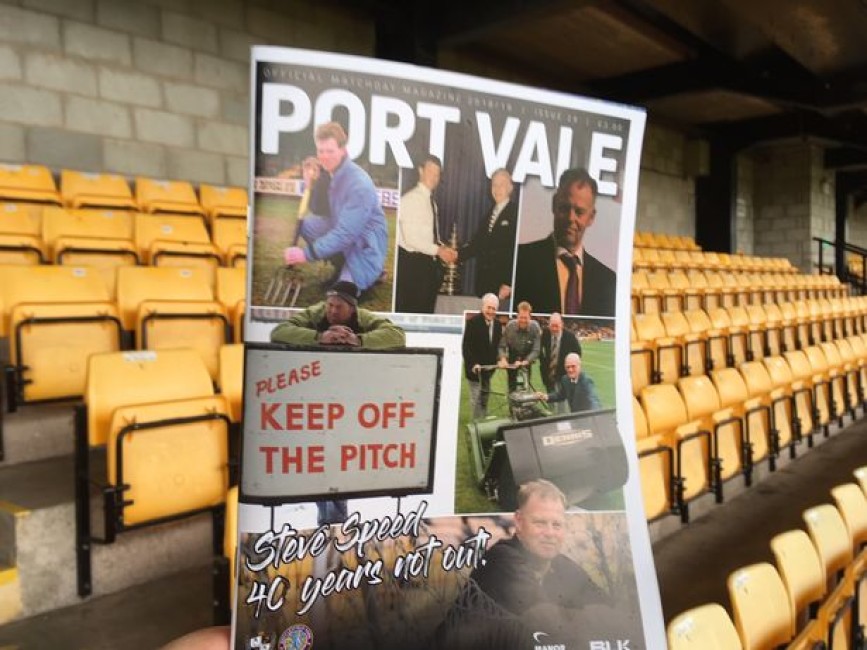 He was appointed to the groundstaff as a 17 year old in 1979, after turning down the job of grave digger for the city council, and has managed to keep the Valiants playing on a pitch which, it's fair to say, has presented plenty of challenges along the way.

Vale Park was built in 1950 and the soil-based pitch doesn't have the advantages of newer sand-based surfaces, undersoil heating and pop up sprinklers.

But Steve has got games on for 19 different managers, from Dennis Butler to John Askey.

So, the Vale have paid tribute to 'Speedy' and dedicated the front cover of the match programme to a man who, it's safe to say, has become a Vale legend.

Staff, players and reporters who have got to know him will testify he takes it personally if a game is flooded or frozen off - a rare occurence thanks to his expertise, experience and damn hard work.

Steve and his team are following in a tradition of respected Vale groundsmen, including Bob Fairbanks, who served the club for 24 years altogether as both head groundsman and assistant before he retired in 2003.

Nor did the club want to forget Denis Dawson, in charge from 1966 to 1975, when he also often had to overcome the elements and, in those days, an even less forgiving pitch.