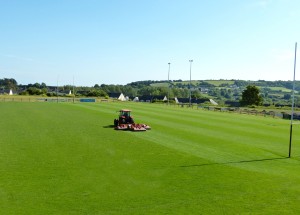 The search for a robust, high output rotary roller mower capable of producing a first-class finish on sportsgrounds, amenity grass, parks and camp sites has culminated in the purchase of a Trimax Pegasus Series 3 Classic wide-area mower by Pembrokeshire contractor, Boot of Lydstep.

Delivered in time for the start of the 2013 season, the 4.93m wide British-built mower is being used by the firm on large, open space mowing contracts at cutting heights ranging from 35mm to 40mm on football pitches up to 70mm, occasionally longer, on surfaces used for rugby, recreation and leisure.

Company director, Jonathan Boot, explained that he had first seen the Trimax Pegasus mower at the Saltex exhibition around five years ago.

"I was not ready at the time to invest in a machine producing a considerably wider cut than the 3.6m mower we were using back then," he says. "Also, I was not totally confident how the Trimax would cope with our widely-spread and diverse range of large-area mowing contracts."

Steadily-rising demand for the company's services over the past two years convinced Jonathan that he needed a wider-cut mower capable of boosting workrates, enabling contracts to be completed more comfortably during the working week.

A spate of bearing failures on the company's existing mower led to attention being focused on a Pegasus as a potential replacement.

Before considering a purchase, Jonathan asked local Trimax dealer, Powercut, Cwmffrwd, Carmarthen, for the name of a Pegasus user in south Wales. "I was directed to Torfaen County Borough Council which, I was told, had been operating two Pegasus mowers successfully on a range of turf surfaces for more than five years," he recalled.

"Speaking with the council, I discovered that they had not had to replace any bearings during that time, convincing me that the Trimax Pegasus was the mower for us.

The decision was reinforced by the fact that we have an excellent relationship with Powercut, an appointed Trimax Elite-level dealer."

Having clocked-up several hundred hours' mowing during 2013, Boot of Lydstep's Pegasus mower is delivering the high re 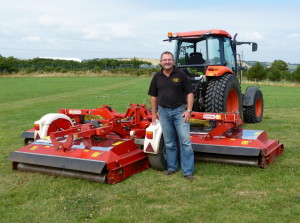 Key features of the machine highlighted by Jonathan include the exceptionally clean cut and even distribution of clippings across the mowing width, the tight turning ability at the end of a run and the safe, comfortable movement between sites, enhanced by independent suspension, a sturdy box section chassis and a 2.5m transport width.

"All in all, I am delighted with the Pegasus," concluded Jonathan. "It's delivered on every aspect that we expected. Not only does it produce a great cut, but the large diameter rollers create a neat, crisply-striped finish, enhancing the appearance of every mown surface. It leaves an extremely good impression with our customers and everyone who uses the grass that we maintain."