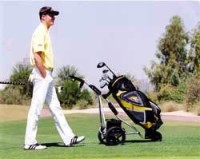 PowaKaddy, the market leading powered trolley brand, has teamed up with singer Ronan Keating to donate funds to the Marie Keating Foundation, a charity that operates in Ireland and aims to ensure that every man, woman and child has access to information about breast cancer. PowaKaddy's ambassador on the European Tour and former Irish Open winner David Carter will be the focus of the campaign as PowaKaddy will be donating money to Ronan's charity every time he makes a birdie or better on Tour this season.

Golf is one of Ronan's favourite past times and PowaKaddy's relationship with him began with 'RonanKaddy' - a specially commissioned PowaKaddy design that featured a built in stereo system, an on-board bar and Harley Davidson wheel trims! Only two were ever made, one for Ronan and the second for the Marie Keating Foundation raising over 2,000 Euros at auction for the Irish charity. The new initiative in 2004 will see an even bigger contribution from PowaKaddy as UK & Eire Sales and Marketing Director explains "We had a lot of fun with Ronan last year when we designed the RonanKaddy and we are delighted to contribute to such a worthy cause again this year. It makes perfect sense to involve our Tour player David Carter as it will add interest and awareness to the Marie Keating Foundation". 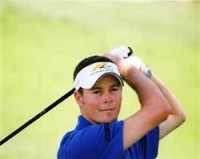 A major factor in PowaKaddy's spiralling sales in recent years has been the ever-expanding customer base of younger golfers and better players. A growing number of club professionals and serious amateur players have switched to PowaKaddy to gain a competitive advantage while many Tour Pros like David Carter use them outside of tournament golf. Equally, stylish refinements to the best-selling Freeway range, the introduction of innovative new products like the fully remote controlled RoboKaddy and a sportier image has seen a new younger audience, including golfing celebrities like Ronan Keating, wanting to sample the 'ultimate golf toy'.

PowaKaddy International Ltd is owned by European Golf Brands, the world's largest manufacturer of electronic golf trolleys. Further information is available from David Silvers at Professional Sports Ventures Ltd on 01276 858930 (e-mail david@profsports.com) or David Wells at PowaKaddy on 01795 473555 (e - mail david.wells@powakaddy.co.uk). Information on the Marie Keating Foundation can be found at www.mariekeating.com