0 Power for the People? 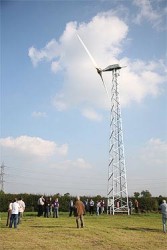 UK's Pitchcare talks about renewable energy and how it can be used at your club.

Those of you that attended BTME at Harrogate may have seen the wind turbine at the entrance to the halls. Venturing further into the exhibition, BIGGA had set up an Envirozone, encompassing renewable energy in the form of Solar PV, wind and the possible option of managing woodland for the purposes of producing biomass; woodfuel and other non- fossilised waste.

One might also consider hydro, anaerobic digestion (AD) and micro CHP (>2kW) aka 'combined heat and power'. All these have tariffs. Biomass, however, is taken out in the latest review for Feed-in Tariffs (FiTs); although it should not be discounted in its ability to heat, given any golf courses' availability of woodland or a hotel complex's ability to utilise waste material.

There has been a noticeable drive that the whole golf and sportsturf industry is becoming ever more responsible in its attitude to managing the land. There have recently been buzz words - 'sustainability' in every possible context and arguments as to what this is - ecology, carbon off-setting etc., etc.

An income stream, however, and eco-friendly

The Government, by means of the Department of Energy and Climate Change (DECC), have created FiTs that offer people and businesses incentives to produce their own electricity (Generation Tariff) and even, perhaps, export to the national grid, thereby generating an actual income.

These tariffs will be paid out by your licensed energy supplier. The grid effectively acts as your battery, accepting the time you generate and the time you use. There must be an Ofgem approved total generation meter connected to the installation, with which all the major electricity companies deal. The big six suppliers are duty bound to make regular payments to those who choose to install. The actual installers must be microgeneration certificated (MCS). The two tariffs are guaranteed for twenty years on newly accredited projects and even twenty-five years for solar PV, although one must consider they only work in daylight. The microCHP is on trial basis and presently fixed for ten years. All FiTs are index linked to inflation.

The sooner one enters into a commitment the better since, as with any scheme, it doesn't take long for people to figure their potential, and investors are already looking at solar farms or wind farming as a source of income over and above the purpose of carbon reduction for which they were designed.

Whilst those in on the act early on should see their commitment honoured, there may come a review to close the tariffs, if they are perceived to be being abused of their purpose. For example, Venture Capitalists are looking into this form of investment because it is 'guarantee backed', and returns of around 8% are, right now, nowhere to be seen in normal financial circles - and over twenty years!

This is another step on the tract of 'relative decoupling'; more economic activity with less environmental damage; more goods and services with fewer resource inputs and fewer emissions.

The world population has gone from 3.5 billion in 1960 to 7 billion in 2011, and emerging economies have ever more thirst for fossil fuels. It is 'guestimated' that we are heading for a world population of 8-10 billion people with ever decreasing resources - oil and gas are becoming increasingly hard to come by.

The Chinese are investing in African states and signing up deals to ensure these countries trade direct with them in such commodities as minerals and fuels, so that they do not get to the open market.

The UK has recognised that fuel, and food for that matter, are inevitably going to rise disproportionately. We need to be more efficient. Studies suggest that electricity could go up by 25% in the immediate future - it went up 8% just prior to the turn of the year, so 25% is not improbable within five years.

The cynical might suggest that prices will go up, precisely because the tariffs exist, and energy companies will look to balance out their payments to those who take them up. Those that don't will be among the common middle British folk who pay, because middle Britain always does!

The average golf club - 18 holes, 650 members, irrigation system and electric buggies - uses around 100,000kwh of energy a year - a large slice being electric to the clubhouse, sheds, buggies and irrigation system. Larger clubs, that hold tournaments, see their bills go through the roof when tented villages and infra-structure is added - a dry summer might do likewise.

What then, if we were to offset some of these costs?

The sheds or clubhouse roof for solar, the free-space for biomass production to make wood pellets, to heat both clubhouse and/or sheds, heat/air source pumps to do similar, wind generation.

Some 30% of the courses in the UK could look at wind - one's initial prejudice is that they are monstrous towers blotting the landscape. But, just suppose they are only 15-20 metres in height and of a lattice framework to blend in?

Clubs have taken in money by having telephone masts on their land, so why not look at this as another income stream? If a site has a moderate wind speed of 5.5m/s, one could assume a turbine in the >1.5-15kW class to produce 20-30000kW-h of energy. This would translate to an income for the club of approaching £10,000 annually.

The idea is that the initial capital investment pays for itself in 5-7 years and, thereafter, courtesy of the FiTs, gives a regular offset return by making the cost of your electricity a revenue stream. You pay 10-12p kW·h and the tariff up to April 2012 will give you 26.7p kW·h (Generation) + 3p kW·h (Export). The PV solar offers varying tariffs on size of installation ranging from 41.3p kW·h to 29.3p kW·h dependant on kW scale of installation.

These are for 25 years, but one also has to account that, year on year, PV loses around 2% of its generating capability and that there are only so many daylight hours, hence perhaps the larger incentive.

One should note that Solar thermal heats water; as opposed to Solar PV creating electric. Solar thermal, as yet, is not in the tariffs, although reviews are being made for the middle of the year that already have been delayed twice.

Think about your facility's location

Westerly and north might like wind, Southerly and east might like solar, although this is by no means a rule of thumb. This works out as a diagonal across Britain with the likes of northwest Scotland being easterly. Also, built up areas negate wind, but offer protection for solar. The issues need specialist attention to affirm one's beliefs of what is practical and viable.

You might not like the idea presently, but may actually be best advised to start thinking smart, not only for your club, but for your home and own pocket. Who is to tell, in this age of uncertainty? It certainly is good for the planet, if that 'floats your boat'.

The extra 2 billion people over the next thirty years are certainly going want at least a motorised scooter to run around on, and that alone will further rid the plant of fossil fuels to raise energy consumption costs. These new people on the planet will also eat a lot as well, and food prices will rise because of the increasing cost of deliver and demand.