In terms of new builds, the golf course construction industry has virtually come to a halt in the UK in recent years, with many of our golf course architects now focusing on redesigns/refurbishments or heading further afield to the continent and beyond for new course constructions. However, there are a few new developments either coming on line or just being completed.

Fiddlers Ferry in Cheshire is one such course that has recently been completed; a self build project that the owners, Mark Overton and his wife Elaine, took upon themselves to begin constructing back in 2002.

Owners of True Fit Golf (TFG), they took the decision to invest in building the new course in the shadows of the Fiddlers Ferry power station, perhaps not the most attractive of backdrops but one that certainly gives the course its individuality.

The TFG story began in 1988 when Mark and Elaine started manufacturing golf clubs in barns which are now the golf shop and driving range. They produced golf clubs here until the industry moved back to the Far East about ten years ago.

At this point, Mark decided to go into custom fitted golf clubs and a golf shop. The shop was opened within three months of the mass production of clubs finishing.
The original plan was to build a nine hole par three course to help promote the sale of golf clubs. However, one thing led to another, and the original scheme soon turned into a full blown, par 36, nine hole course.

Not stopping there, they continued to expand, acquiring further land to build another nine holes to complete a full 18 hole course, complete with driving range, which is now open to the public as a pay and play facility.

What makes this project most intriguing is that they built the whole course themselves, bringing in over one million tonnes of soil to transfo rm the barren landscape at the foot of the power station.

Plans for the nine hole course were first drawn up in 2001, and tipping of soil started soon after. In 2002, it was decided to try a make it 18 holes when more land became available.

The first nine holes were shaped up in the summer of 2004 and, in November of that year, Director of Golf, Darren Chapman, came on board. In the summer of 2005 nine fairways were cultivated and seeded by Mark and Darren, and a good start was made on building the USGA spec greens.

In the February of 2006, greenkeeper James Cope joined the fold. Darren and James soon realised that the design of the course left a lot to be desired; they felt that its playability was a big problem and suggested alterations to Mark. These were taken on board and the back nine was redesigned to work in better with the front nine. 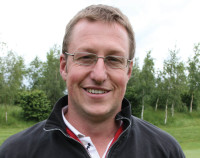 James came with plenty of experience and a thirst for a challenge. He began his career in irrigation, at TIS Scotland, before moving to Kestrel Golf to help build the Nicklaus Course at Carden Park.

He learned a lot from working under the guidance of Andy Campbell and Keith Homes, deputy on the Cheshire course. After five years there he moved on to help build and grow in Henlle Park Golf Course in north Shropshire.

He spent three very enjoyable years there and was able to watch the course change from a Georgian park into an established 18 hole parkland course. "The move to Fiddlers Ferry was a great opportunity for me to construct a brand new course," says James, "and work on every aspect of build, growing in and maintaining a new course."

A second greenkeeper, Garry Curran, was soon to join the team. He arrived from Childwall Golf Club and assisted in building eleven greens and tees and the installation of an automated irrigation system.

"During the build period the team were often working fifteen hours a day to make the most of the summer weather and daylight hours," says James, "enabling us to get as much done before the ground condition became too poor to get around the course. Remember, this part of the country is renowned for its rain, and the snow of the last two winters slowed us down somewhat as well. In any event, most of the winter months were set aside for planting swathes of trees and gorse, so we had a plan in place, regardless of what Mother Nature threw at us."

The first phase of the course was opened in April 2007 to provide both a new pay and play facility and allow TFG customers to try out their newly acquired golf clubs.
The next stage was to build a driving range and shed complex to house all the golf course equipment. Every bit of equipment is owned by the company, even the large 360° diggers, dumpers and bulldozers.

The new course takes its name from the old Mersey Golf Club that used to be sited on adjacent land, which closed in the 1960's, but was always known as Fiddlers Ferry by the locals.

At the same time, they took on another greenkeeper, Mariusz Prus, to help manage the course. "He could not have joined at a busier time," says James. "We not only had to manage and maintain a new nine hole course and continue with the growing in - we still had a further seven holes to construct."

This work was completed in August 2009, allowing a further ten months to establish before the official opening in June 2010.

"The greens and tees are USGA spec constructions, which we have slightly adapted to reduce costs. They have a herringbone primary drainage system, over which is placed a full 300mm rootzone layer and then sown with a bent and fescue mix. Initially, cutting was done daily with our John Deere 220B hand mowers throughout the growing seasons," explains James. "Mowing heights in the summer are 6mm, and between 7-8mm in the winter. Now the greens are more established, and to save time, we use our triple mower in the summer months switching back to pedestrian mowers during the winter when we have more time on our hands."

"Tees were seeded with a rye grass mix at the same time as the greens, and are cut twice a week using John Deere 260B hand mowers to 12mm. They are divoted once a week with the same rye grass seed mix to get the best and quickest recovery period."

"Fairways are cut twice a week to15mm with a John Deere 3235B. Currently, we are in the process of draining the fairways at five metre intervals and, at a later date, we will sand band them as well."

Semi rough is single cut around the fairways and greens, once a week, at about 35mm with a John Deere 2653A

Rough is cut at 50mm once a week with a Toro Groundsmaster 4700D. Native rough is cut once a year and is left to its own devices the rest of the time, to allow nature to take its course.

"We've also dug out a number of drainage ditches and ponds to control water run off and to help the course drain quickly. They also challenge the golfer and make the course more testing whilst, at the same, becoming a wildlife haven for many birds and mammals. When first built, the ponds had quite a bit of pond weed, but this

now seems to be under control with foliage taking over," says James. "A few swans have taken up residence, with one pair rearing a single cygnet this year, which is great to see. It is, now, not unusual to see hares, geese and heron on what was, originally, unused waste ground separating Wigan from Warrington! I believe that the golf course is having a positive affect on local wildlife," states James, "which is the complete opposite of what many believe about golf courses raping the land."

"We've planted over fifteen thousand whips around the course, and these are establishing well. We've also planted over 800 semi-mature trees, between four and five metres tall, that have given the course some maturity whilst also helping to define the fairways."

Not content with resting on their laurels, James and his team have now started on the final phase of, what was, the original concept; building a nine hole, par three academy course. More waste soil spoil has been delivered to site, and shaped to form the basic course layout. Green positions have been agreed and sculpted out ready for USGA construction.

It will be a couple of years before the academy opens but, when it does, Fiddlers Ferry will become a unique pay and play facility for the people of Cheshire. The course is already doing pretty well, with over 15,000 rounds of golf played this year to date on its new 18 hole golf facility, whilst the driving range is fast becoming a popular teaching facility with its brand new video studio facilities.

Director of Golf, Darren Chapman says; "We have been determined to create an accessible course that will be both challenging and enjoyable for players of all abilities."

"There is great emphasis in today's climate on making sure the environmental impact of any new course is a positive one, and I am confident that we will be successful on that front, too. With any water on the course draining into the system of ponds, we would hope to be self sufficient in the face of a drought," he explains. "We also have our own bore hole."

At under 7,000 yards, Darren admits that the overall length will not be competing to stage championship events, but says putting on big events is not the focus of the development. "We want this to be a course that will challenge the low handicappers, but will also be a fair test to the higher handicapper players."

The club are also looking at renewable energies to help save money and reduce their carbon footprint. They are currently working on a project to reduce the amount of

diesel and electricity they use by developing a system to recycle waste food oil, changing it into biodiesel for use in their vehicles, along with fuelling a generator to produce their own electricity.

So, it goes without saying, working at Fiddlers Ferry has been an interesting challenge for all the staff, in more ways than one. James's main concern now is to ensure the course continues to mature into a challenge that offers something for golfers of all ages and abilities.

I can vouch for how well the course has come on since my last visit back in 2007, when the first nine holes opened; the greens, fairways and tees are much more dense, and it now looks and feels like a proper golf course.

It would appear that Mark and Elaine's vision is nearing completion; a remarkable feat, especially given the difficult economic climate.