by Laurence Gale MSc
in Local Authority
on 05 Jan 2011

0 Power to the People?

I had the opportunity to attend a very important conference on the future of Parks Services, a topic which, as an ex local authority parks manager, is close to my heart.

The way service provision is held to account has been constantly changing for many years which, in turn, has affected the service delivery and the way parks are run.

Levels of service have been downgraded, which has resulted in less inputs and money being available, and the eroding away of many skills.

Parks services are now packaged with other key services, such as highway, verge and cleansing maintenance, areas which usually take precedent.

For parks managers, their hands have been tied by political procedures and changes to budgets. But, more importantly, they have lost their voice to more powerful council officers who do not have a full understanding and affinity with parks provision.

How do we put a value on what parks and open spaces bring to the table? A well kept park, with appropriate activities and events, have the power to bring the community together.

There is a need to ensure the future of parks, both large and small. However, there are real concerns within many local authorities about how to retain these services in the present economic climate.

The new coalition government is creating a very different landscape for public voice delivery, with significant reductions in public expenditure and a fundamental shift to local decision making. We are entering a new era, where local services will become accountable to local people. 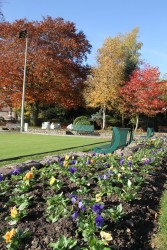 The Power to Parks conference was attended by over seventy delegates, who either manage or deliver parks services. The day gave everyone the opportunity to review the latest developments and opportunities being formulated to safeguard the future of our parks and open spaces.

The first speaker was Martyn Allison, National Adviser of Culture and Sport for Local Government Improvement & Development. He talked about his role and how important national indicators are for gaining support for government funding.

He also touched on how the requirements of parks and open spaces provision was not being heard at the highest level, and how work needed to be done to improve the situation. He spoke about three key issues; Positioning, Performance and Self-Improvement.

Positioning: How local authorities are viewed by decision makers. Parks and open spaces still remain undervalued or not represented on Local Strategic Partnerships and Local Area Agreements. Local authorities need to find better ways of producing indicators to help raise their profile and gain support at the highest level.

Performance: How well do we deliver the services in terms of effectiveness and value for money? It is a difficult area, with no national indicators currently available or little evidence or measuring performance.

Self-Improvement: Parks and open spaces have not been part of any national or regional improvement strategies and networks. However, they do have Green Flag awards which have helped raise awareness, but not necessarily driven improvements.

The world is changing, and the impact of the economic crisis has dramatically altered the way services are funded, with far less resources and budgets available.

The public sector will be 20-30% smaller, in financial terms, by 2014 and a greater focus will be spent on productivity. In fact, many councils have decided to take a bigger hit in the first year of the current budget cuts, by reducing expenditure by 15%. This is being achieved thorough job losses and reduced service provision.

Government also want to promote 'Localism' or the 'Big Society'. A new vision in the way existing services are delivered, particularly in the public parks sector.

Essentially, this is the devolution of services from central government to local government, and then on to members of the community.

This, in essence, means that local authorities need to address their service provision to make savings, provide new ways of working and be better at monitoring and recording the performance of their service delivery.

However, the main driver is to encourage members of the community to take on many of these services. (Friends of the Parks and local trust agreement).

The next speaker was Dr Edward Hobson, Head of Sustainable Inclusive Design for CABE (Commission for Architecture and the Built Environment), who gave examples of how community groups have taken ownership and managed public space. He touched on how councils could integrate some service providers to reduce costs. He promoted many good examples, that included Buckinghamshire County Council, Torbay Coast & Countryside Trust and Warley Woods Community Trust, who have successfully taken over the management of valuable land assets. In total, CABE have helped well over a 1,000 National Asset Transfers.

Delegates were then given an update on Heritage Lottery Funding by Charlotte Hazlewood. She confirmed that the Parks for People Programmes had given out over £500 million since 1996, with the average grant being around £1 million, and pointed out that there was still plenty of money available.
Charlotte was keen to indicate the relevant criteria (five outcomes) for a successful Parks for People funding bid; a focused application, what the money is for, evidence of how the park is valued by the community, how the park meets local, social, economic and environmental needs and, finally, how the parks management actively involves local people, and achieves the following:

She finally outlined a number of successful awards and what other opportunities they can fund.

The next speaker was Neil O'Connor, Director of Communities and Neighbourhoods for the Department of Communities and Local Government. He spoke about the principles of the new Big Society initiative, and how it will affect many areas of the community in terms of giving greater power to the public realm, allowing them to take control of their own community services. He said it would remove bureaucracy, empower local people to take action, and make public bodies and services more transparent.

Finally, we were given a talk by David Evans, Landscape and Green Space Consultant, who spoke about the different range of service models available. He gave examples of good and not so good models, and the reason behind their success or failure which, for many, is dependant on the information and diversity of the sites and their standing in the community. It was important to recognise whole life costs, initial capital and set up and maintenance costs.

However, the main driver for success is the calibre and commitment of the people involved in running the newly formed trust organisations.

The day ended with a question and answer session.

I can see where the government want us to go, in terms of devolving historic public service provision to the community, on the basis it will save money and empower the community to decide on what service they want themselves.

From personal experience, some small scale schemes may work very well. However, the bigger picture may entail a lot of effort, time and resources to put in place. Consulting with the public can be a complex and time consuming activity.

Are we expecting these new trusts to be volunteer driven organisations? I have seen to many volunteer groups disband once key members leave.

How do we legislate for this? Many sports clubs have, historically, been run successfully on a volunteer basis. But, this is no longer the case, with fewer volunteers coming forward.

The younger generation appear not to be interested in working for nothing and, with park services, we are not talking about the odd hour here and there; we require people to commit many hours of their time to the cause.

However, the biggest hurdle for whoever takes on the running of these trusts and organisations is front line service provision. What experience do they have in delivering these services?

For example, do they have the relevant knowledge and experience to oversee a specific grounds maintenance contract? They still need to employ and train operatives.

For me, that's what the Parks Department was originally set up to do. Cost was rarely a factor. It was simply a case of delivering horticultural excellence. But, as circumstances have changed, the departments have been poor at selling themselves and promoting the benefits of our valuable parks.
It will be interesting to see how this Big Society initiative works.

More information about these issues can be found on the Greenspace website - www.green-space.org.uk

Power to the parks funding